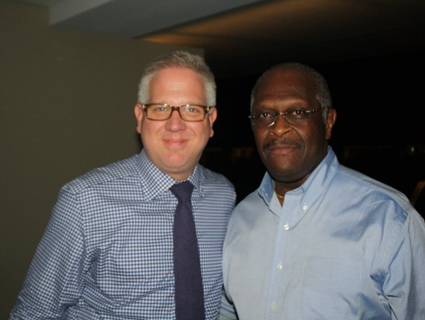 Perhaps I should backtrack. Last month, GOP presidential candidate Herman Cain publicly apologized for a number of anti-Islam statements he had made on the campaign trail. After calling on authorities to block the expansion of an Islamic community center in Murfreesboro, Tennessee; warning that Muslims were attempting to force a radical strain of Islamic Sharia law on unsuspecting Americans; and pledging not to appoint any Muslims to his cabinet, the former pizza mogul’s longshot run for the White House had hit a serious rut. So he met with Muslim leaders in Northern Virginia to smooth things out. It didn’t change that fact that Cain was getting his ideas on Islam from debunked conspiracy theories, but he at least seemed to have reached the conclusion that Muslims don’t bite.

But now the authors of those conspiracy theories are none too pleased. Frank Gaffney, a Washington Times columnist and anti-Sharia activist who once warned that President Obama was raised a Muslim and might still be one, told Think Progress that Cain might be in league with the Muslim Brotherhood:

The ADAMS Center is a prominent Muslim Brotherhood apparatus in Washington DC. It’s one of the most aggressive proponents of its agenda in the city. Specifically, meeting with Mohamed Magid who is the president of the largest Muslim Brotherhood front in the United States, who happens also to be the Imam at the ADAMS Center. It’s one of those things, it’s a very problematic departure from what I think had been a generally sensible [position].”

Bryan Fischer, the American Family Association issues director who has called for a moratorium on mosque construction in the United States, is also frustrated with Cain’s new dance. “Cain had said that any community which does not want a jihadist-spouting mosque in its community shouldn’t be forced to have one,” he wrote. “And of course, he was right about that, and it’s unfortunate that he has retracted the statement. His bobbing and weaving on Islam is leaving his supporters a bit dazed and is hurting his candidacy.”

This comes just one weeks after the anti-immigration group Numbers USA gave Cain a “C-“ on its candidate report card—despite the fact that he had previously promised to build a giant moat along the entire US–Mexican border, filled with alligators.