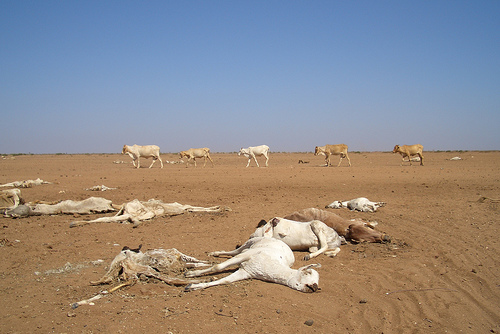 Top military brass, the Central Intelligence Agency, and the UN Secretary General have all warned that climate change will create conflicts in the future. But environmental shifts are already causing wars, argues a team of experts in a new paper in Nature (PDF) published this month.

El Niño, the oscillating period of warmer temperatures in the Pacific Ocean, brings with it higher temperatures on land and lower rainfall every three to seven years. According to the researchers, the weather phenomenon doubles the risk of civil conflicts in 90 tropical countries. They also believe it has been a potential factor in 21 percent of the world’s conflicts over a 54-year span.

As the authors explain, events like droughts put strain on food and water resources, which can cause conflict. Natural disasters can also cause disease, famine, and economic distress, which may create tensions between factions.

The three authors, whose research backgrounds include sustainability, climate science, and international affairs, looked at conflicts that involved more than 25 deaths between 1950 and 2004. They looked at the annual conflict risk in each country, and determined that there was a 3 percent chance of conflict during cooler periods and a 6 percent risk during the periods of El Niño. There the likelihood of conflict in countries that weren’t affected by El Niño stayed the same.

Certainly, many have already speculated about historical conflicts and climatic shifts, but this is (as far as I can tell) the first systematic attempt to understand how the conflicts of recent history fit in with climatic changes. While the authors aren’t saying that El Niño was at fault for any particular incident of violence, they do make the connection between climate shifts and modern conflicts and raise questions about the implications for a future as the climate changes. Global warming, they argue, will exacerbate the normal weather cycles and make the typical fluctuations more extreme. Basically, it will take a trend that already exists and make it worse.

The press release from the Earth Institute at Columbia University highlights some specific conflicts that coincided with warmer weather, which wasn’t included in the Nature paper:

In 1982, a powerful El Niño struck impoverished highland Peru, destroying crops; that year, simmering guerrilla attacks by the revolutionary Shining Path movement turned into a full-scale 20-year civil war that still sputters today. Separately, forces in southern Sudan were already facing off with the domineering north, when intense warfare broke out in the El Niño year of 1963. The insurrection abated, but flared again in 1976, another El Niño year. Then, 1983 saw a major El Niño—and the cataclysmic outbreak of more than 20 years of fighting that killed 2 million people, arguably the world’s bloodiest conflict since World War II. It culminated only this summer, when South Sudan became a separate nation; fighting continues in border areas. [Lead author Solomon] Hsiang said some other countries where festering conflicts have tended to blow up during El Niños include El Salvador, the Philippines and Uganda (1972); Angola, Haiti and Myanmar (1991); and Congo, Eritrea, Indonesia and Rwanda (1997).

Of course, the weather shifts weren’t the only reason for the conflict. “But,” as Hsiang said in a statement, “if you have social inequality, people are poor, and there are underlying tensions, it seems possible that climate can deliver the knockout punch.”