Maybe all President Obama needs to break through the GOP’s wall of opposition to ending the Bush tax cuts for the super-rich is a new sales strategy. Michael Ettlinger of the Center for American Progress has a suggestion: pitch the expiration of the cuts as a temporary pay freeze for America’s wealthiest individuals.

Here’s how the math works out, according to Ettlinger. Assuming high-end incomes continue rising at the same rate they have over the past ten years, allowing the Bush cuts to expire at the end of 2012 would have the equivalent effect of a 10-month pay freeze for the richest 1 percent: 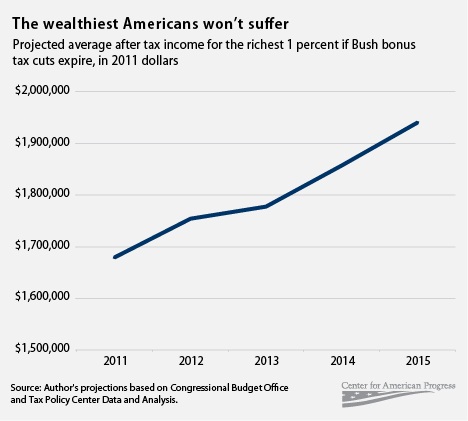 Does that matter to the Republicans of 2011? Probably not.

But rich GOPers who are terrified by the potential long-term effects of S&P’s downgrade of the US’ credit rating should think hard about whether their party’s hardline anti-tax stanch is really in their best interests. Absent a long-term solution for plugging the deficit—and any solution short of America’s transformation into libertarian fantasyland is going to require more revenues—America’s debt will eventually be downgraded again. If that happens, the cost of borrowing money, expanding businesses, and creating jobs will spike. Do rich Republicans really want that? Probably not. In the long run, allowing the Bush tax cuts to expire is about keeping the rich… rich.