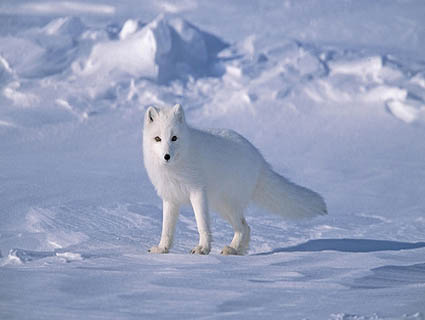 The Arctic National Wildlife Refuge in remote northern Alaska is home to a surprisingly diverse array of wildlife: polar bears, caribou, wolverines, lemmings, and others all call the frigid, windswept place home. But one infamous strip of coastline in the massive refuge is also home to nearly two billion barrels of recoverable oil (enough, the feds estimate, to supply America for nine months), which has placed it squarely in the center of a decades-long controversy over whether to open the ecologically sensitive region for oil and gas development or keep it locked up as wilderness.

On Monday the US Fish and Wildlife Service took the first step in granting increased federal protection to a relatively small, oil-rich region within ANWR known as the “1002 area” by nominating it for wilderness designation in a lengthy report (PDF) on conservation plans for ANWR. Only Congress can declare wilderness areas, and the “preliminary recommendation” made in the report is only the beginning of a long (and possibly dead-end) road to approval. But it is the first time such a recommendation has been made since the area was set aside for study in a 1980 federal law (from which the area takes its name), and environmental activists and the FWS agree that it marks a major turning point in an ongoing struggle in Alaska between conservationists and oil and gas developers.

“We’re still a long way from getting to the end of the road, and we don’t know where the road is going, but it’s a step” toward more comprehensive protection for the area, FWS spokesman Bruce Woods said.

The way things stand now, area 1002 is within the wildlife refuge but still potentially open to oil and gas development (with a permit from Congress, which it has yet to grant anyone). Monday’s report found that the “coastal plain” region of ANWR (a large swatch that contains area 1002), along with the Brooks Range mountains and Porcupine Plateau, meets the requirements outlined in the Wilderness Act for what can be designated wilderness—which, Woods added, do not include considering protection against potential development. Then again, he said from his Anchorage office, “most of Alaska would qualify [as wilderness], including some places I could slingshot from where I’m sitting now.” 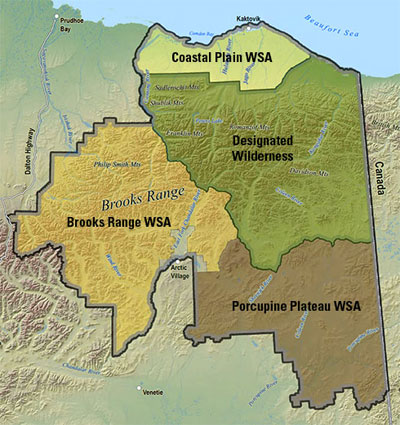 The Arctic National Wildlife Refuge. Area 1002 is at the top of the “Coastal Plains Wilderness Study Area (WSA).” Courtesy US Fish and Wildlife Service

Still, the ubiquity of wilderness in Alaska does not make it a less valuable commodity in ANWR. A wilderness designation for the coastal plain region would afford some protection from the specter of development that has loomed over it for the last 30 years, and that’s “a critical piece of the puzzle for the Arctic refuge,” according to Julia Kates of advocacy group Defenders of Wildlife. Moreover, she said, by giving the region due consideration for wilderness designation, FWS has created a forum for citizens to throw down directly in a fight that has until now raged mostly on Capitol Hill. (FWS will consider public feedback on the report until Nov. 15).

While the coastal plain is the only wilderness nominee with oil and gas development potential, all three areas host an array of wildlife whose future, some argue, might also be riding on a wilderness designation. Defenders of Wildlife released its own report (PDF) Monday, which found nearly half of the mammal species—including adorable little critters like the arctic fox and the Dall sheep—in ANWR to be “highly vulnerable” to climate change. The majority of these were animals who live in the snowbound tundra, which is being “squeezed” further north by expanding forests, Defenders of Wildlife scientist Aimee Delach said.

In the past half-century, Alaska warmed twice as fast as the rest of the US. As temperatures rise, the geographic range of animals like polar bears who depend on cold tends to shift north. Unfortunately, north of ANWR is the Arctic Ocean, which is not really a viable housing alternative for a tiny lemming. The situation is “certainly distressing as far as the survival of the species is concerned,” Delach said. While a wilderness designation would obviously not slow the effects of climate change, it could prevent habitat loss and general disturbance that would result from development and further threaten these species.

In any case, there’s no chance any of these areas will officially become wilderness in the immediate future. Woods suspects it will be a year or more before anything definitive happens: “Trying to predict what’s happening at the end of 2012 is something my crystal ball isn’t capable of.”