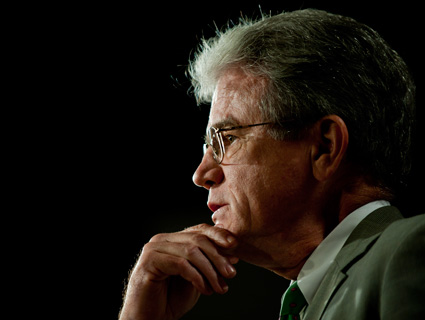 Sen. Tom Coburn (R-Okla.) managed to forge a rare bipartisan consensus on Capitol Hill this week: He rolled out a $9 trillion budget-reduction plan that both Democrats and Republicans hate. The 621-page proposal (PDF) is titled “Back in Black“; given the reaction from both sides of the aisle, maybe he should have called it “Dirty Deeds Done Dirt Cheap.” Liberals have assailed its recommendation for $2.64 trillion in cuts to Medicare and Medicaid over the next decade. Conservatives are up in arms over the plan to collect nearly $1 trillion by eliminating a bunch of corporate tax breaks. Coburn’s blueprint “is very ambitious,” writes the American Conservative’s Daniel Larison, “and therefore almost certainly doomed.”

But beyond the party-line hand-wringing, little attention has been given to what might be the most radical of Coburn’s ideas: A $1 trillion reduction in military spending over the next 10 years. In a climate where even budget-obsessed tea party Republicans are loath to cut defense dollars, parts of the Oklahoma conservative’s Pentagon plan sound downright progressive.

Some of Coburn’s suggested cuts befit a lifelong conservative. He’d push more military retirees off their government health care plans. He’d shutter Pentagon-run elementary schools for the children of service members. And he’d end subsidies for the military’s 252 on-base grocery stores, demanding that they adopt a plan for self-sufficiency that’s “similar to Walmart.” If accomplished, that could hike up military families’ yearly grocery bills by an average of $400.

But conservatives are aghast that Coburn has targeted some of their most sacred cows, as well. There is “no danger that Republican activists, pundits, or other politicians are going to endorse what may be the most credible fiscal plan on offer,” writes Larison. Among the bolder ideas in Coburn’s plan:

Any of these items could have been ripped from a progressive policy playbook. Coburn’s military budget “is far more radical than Obama’s own recommendation to slash the defense budget by $400 billion,” writes Commentary‘s Alana Goodman. “[P]roposals like Coburn’s only end up encouraging American-declinists to seek bolder defense cuts.”

Will tea party congressmen or Republican presidential hopefuls pay “Back to Black” any heed? Not likely. The GOP helped itself to a heap of pork when it approved the 2012 Pentagon budget this spring. While primary front-runner Michele Bachmann has been predicting budget Armageddon for months, she’s also made clear that the military purse is sacrosanct. “Our government is in a fiscal crisis,” she wrote on the Heritage Foundation’s blog in May. “But, as we work to reverse the tide of deficit spending, I urge that we exercise great caution before anyone takes a scalpel to the defense budget.” And a spokesman for Senate Minority Leader Mitch McConnell (R-Ky.) told the Washington Times this week that “the GOP would never approve [military] cuts of $1 trillion.”

Coburn’s proposal may be a nonstarter on Capitol Hill, but it’s in tune with public attitudes. A Rasmussen poll released Monday suggests that roughly half of Americans “feel it is possible to significantly reduce military spending without putting the American people at risk.” Seventy-nine percent of respondents said the country “spends too much on defending other countries,” and a plurality of those polled agreed that we should withdraw our forces from Europe and Japan. Coburn concurs: His plan would cut the number of service members stationed in Europe and Asia by one-third, for a savings of about $70 billion over ten years.

So far, no high-profile Democrats have commented on Coburn’s cuts. But if they’re willing to help the Senate’s premier right-wing budget hawk move the ball down the field for military reductions, they certainly would have popular opinion on their side. “Numbers such as these are probably making folks like Tom Coburn feel a little more comfortable in offering up military cuts as part of larger scale spending reduction packages,” writes Jazz Shaw at the conservative site Hot Air. “And this topic in particular is one which was never going to find much opposition among liberals.”