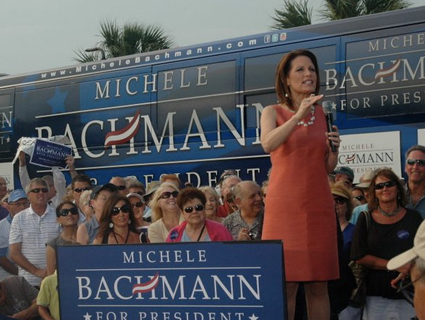 Two months back, I reported on Mike Huckabee’s ties to Janet Porter, a social conservative crusader who has suggested that President Obama is a Soviet mole, that Haitians are “dedicated to Satan,” and that gay marriage caused Noah’s flood. Now Kyle Mantyla points out that Rep. Michele Bachmann (R-Minn.), floated by some as Mike Huckabee 2.0, also has ties to Porter; Bachmann spoke at her conference in September, 2009—six months after Porter accused the President of being a spy:

Of course, the radical views held by Porter and the others in no way dissuaded Bachmann from attending. In fact, Bachmann appeared on Porter’s radio program ahead of the event and used it as an opportunity to [praise] her and endorse the May Day at the Lincoln Memorial prayer event Porter was planning for the following spring.

That May Day event ended up being so infused with Seven Mountains Dominion Theology that Porter lost her radio program and almost ended her career at a Religious Right activist, until she showed up in Ohio earlier this year where she began scheduling fetuses to “testify” on behalf of her extremist anti-choice “Heartbeat Bill.”  In her downtime, she was busy praying for God to give Christians control over the media and every level of government.

Seven Mountains Dominion Theology, for the uninitiated, posits that Christians have an obligation to fill the ranks of government and other key areas—mountains—of life ahead of the second coming. Bachmann’s relationship with Porter isn’t as deep as Huckabee’s (who called her a “prophetic voice”). But it does underscore a problem she’ll face as she looks to establish her credibility with mainstream Republicans: Bachmann has made it in politics by forging alliances with folks whose ideologies make her own conspiratorial views and anti-gay positions seem downright pedestrian.