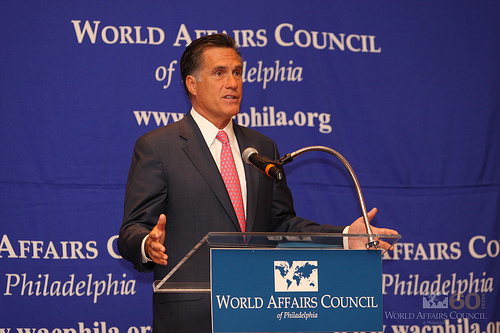 GOP frontrunner Mitt Romney, said to have raised as much as $20 million in the past three months, just can’t get his story straight. On multiple occasions, the former Massachusetts governor has claimed that President Obama made the Great Recession “worse” with his economic policies. As Romney put it on the day he officially unveiled his candidacy, “When [Obama] took office, the economy was in recession, and he made it worse, and he made it last longer.”

Except that’s nowhere near true. As Washington Post “Fact-Checker” Glenn Kessler notes, the National Bureau of Economic Research declared the recession officially over in June 2009, six months after Obama took office. So, then, how can Obama have made the recession “worse” and “last longer”? After vetting Romney’s argument, the Associated Press concluded, “Obama did not, as Romney alleged, make the economy worse than it was when he took office.”

Last week, when questioned by a reporter on this point, Romney didn’t defend his assertions or trot out economic data to prove them; instead, he claimed he’d never said such a thing. “I didn’t say that things are worse,” he said. “What I said was that the economy hasn’t turned around.” In fact he’d said exactly that on at least three prior occasions.

Now, Romney has flipped again. Asked by a local reporter in Amherst, New Hampshire, about his prior claims about Obama and the economy, Romney reverted to his original, debunked position. “The recession was made deeper and more painful for more Americans by virtue of the president’s plan,” Romney said. “The recovery has been slower and more painful for millions of Americans because of the president’s failures. He made the recession worse and the recovery more anemic.” Here’s the video: