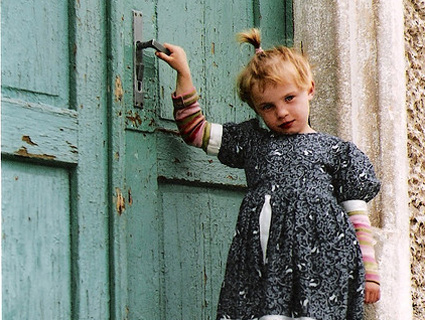 In November 2008, Michele Bachmann was in trouble. The incumbent Minnesota congresswoman was facing a Democratic wave and the backlash from comments she made questioning Barack Obama’s patriotism, and polls showed her neck-and-neck with her challenger, former state transportation commissioner Elwyn Tinklenberg. But at the last minute, some unlikely reinforcements arrived to give Bachmann a boost: kids.

Over the last week of the campaign, nearly six-dozen home-schooled students, some flown in from out of state, joined the Bachmann campaign, knocking on doors, sending out mailers, and making thousands of phone calls. The kids, all between the ages of 12 and 19, were members of GenJ Student Action Team, part of a national organization called Generation Joshua, which trains home-schooled students to become political activists. When the votes were counted, Bachmann held on to her seat in a squeaker—and she credited her child army with pushing her over to the top.

“We often hear that there aren’t young people in the Republican Party,” she said in her victory speech. “I’m here to tell you that couldn’t be further from the truth.”

Now, as Bachmann sets her sights on the Republican presidential nomination, that same youth brigade could be her secret weapon. Over the last decade, Bachmann, who home-schooled her five biological children, has developed strong ties to state and national home-school organizations. In March, she joined fellow presidential candidates Rep. Ron Paul (R-Texas) and businessman Herman Cain at a conference organized by the Network of Iowa Christian Home Educators (NICHE) in Des Moines. And in 2009, she addressed Generation Joshua’s national iGovern conference in Washington, DC.

Bachmann’s love for home-school organizations is far from unrequited. The Home School Legal Defense Association PAC, a spinoff of Generation Joshua’s parent organization, donated $3,250 to her reelection effort in 2008 and contributed cash and manpower to her successful congressional campaigns in 2006 and 2010.

“The one thing you can’t buy, find, or create is time,” Bachmann said in an appearance on the radio show “Home School Heartbeat” in September 2010. “And thanks to Generation Joshua volunteers, they help us become confident that we’ll reach more people and meet our voter contact goals before the polls close on Election Day. And that directly impacts whether or not we can declare victory on November 2nd.”

In courting home-schoolers, Bachmann isn’t simply sticking with her principles; she’s following the same blueprint that propelled former Arkansas Gov. Mike Huckabee to a surprise victory in the Iowa caucuses three years ago. Huckabee, whose 2008 campaign was guided by Bachmann’s top strategist Ed Rollins, used the state’s home-school network as a base of support at a time when he was cash-strapped and mostly unknown.

Huckabee discussed home schooling on his campaign website and cut a promotional video touting his past support for home-schooling parents as governor—noting, for instance, that he had appointed a home-schooling parent to the Arkansas board of education for the first time in the state’s history and eliminated the fee requirement for state standardized tests.

But Huckabee’s biggest boost came from Generation Joshua—or more specifically, from the organization’s founder, Michael Farris, who endorsed the former governor just before the Ames Straw Poll. That contest, held in Ames, Iowa, in August, is viewed as a critical step on the road to the caucuses, testing candidates’ ground organization as well as their ability to win over voters.

As a state senator, Bachmann took $50,000 in contributions from members of the Alliance for the Separation of School and State, a group committed to “ending government involvement in education.”

Farris is the former president of Patrick Henry College, the Virginia institution that aspires to be the “Evangelical Ivy,” preparing the nation’s brightest home-schooled students (whom the school is geared toward) for careers in public service. Through the efforts of Farris and others, home-schoolers have attained levels of political influence disproportionate to their small numbers. A 2003 study (PDF) funded by the Home School Legal Defense Association (HSLDA) suggested that home-schooled 18- to 24-year-olds are 14 times more likely to have worked for a political campaign and more than three times as likely to have voted as non-home-schooled students.

Farris has not taken sides in the presidential race, but he hinted in an interview with Politico earlier this month that Bachmann is one of the candidates he is considering. (The only other 2012 candidate whose children were home-schooled is former Pennsylvania Sen. Rick Santorum, but polls show him stuck in the low single digits.)

In Iowa, Bachmann has followed Huckabee’s example. One of her first moves of the 2010 campaign was to secure the support of GOP state Sen. Kent Sorenson. Sorenson, a family-values crusader who helped lead the successful push to replace the state Supreme Court judges who legalized gay marriage, is one of Iowa’s highest-profile home-school activists. At the NICHE conference, Sorenson led a workshop instructing home-schoolers on how to “re-engage in the political arena in order to come alongside the church in its efforts to turn back the tide” of secularism.

In particular, Bachmann has earned the praise of the HSLDA for her support of the Family Education Freedom Act. That bill, which has been introduced off and on in Congress since 1998, would create a tax credit for parents who home-school their children “for qualified educational expenses from a qualified education institution.” A voucher, in other words. Under the bill, first championed by Paul, parents would be eligible for up to $5,000 per child.

For Bachmann, support from the home-school community predates her arrival in Washington. In an editorial for the St. Paul Pioneer Press during her first congressional campaign, journalist Karl Bremer reported that reported that Bachmann had received $50,000 in contributions—mostly from out of state—from members of the Alliance for the Separation of School and State, a Georgia-based group committed to “ending government involvement in education.”

Bachmann, who at the time dismissed the allegation as guilt by association, is not planning on abolishing public schools any time soon. But since the 1990s she has been working to promote home schooling and the decentralization of public schools—and she has led by example. When she speaks to social-conservative groups, she mentions her five home-schooled children—and then tells them she wanted to home-school her 23 foster children too, but was prevented from doing so by state laws.

Bachmann cut her teeth in politics by mobilizing social conservatives, many of whom were home-schoolers, against the Profile of Learning, Minnesota’s first state curriculum standard. Bachmann and her allies viewed the standards, which were a requirement for high school graduation, as an unconstitutional expansion of governmental control, encroaching not only on the rights of local school districts, but also on the rights of families to shape their children’s values. She and her allies hit the standards for promoting what they considered moral relativism—that is, consciously pushing concepts like globalism and sustainability that fundamentally clashed with the faith-based values instilled at home.

“I come here as one of you,” she told the NICHE audience in Des Moines. That much seems clear. Whether it’ll push her over the top come January remains to be seen.