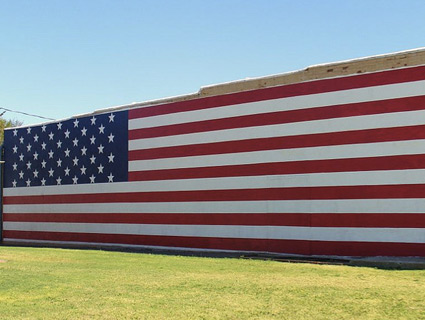 Just in time for your Fourth of July festivities, here’s a collection of scenes, rants, and polemic that are dripping with patriotic verve and swagger. We’re running the flag-waving gamut from South Park to Bruce Springsteen oratory.

Be sure to enjoy with cold beer and an extreme love of one’s country.

The Rolling Stones do America proud
Leave it to a flag-draped Mick Jagger and the rest of the Stones to teach Americans how to most patriotically wield a Gibson guitar. In this video, the Rolling Stones are performing “Satisfaction” on stage when a misguided, eager fan charges them. Keith Richards responds by taking off his guitar, waiting for the guy to get close, and then repeatedly slamming his instrument against the would-be assailant’s face. He quickly resumes playing the song’s signature riff without missing a beat. That badass-ness pretty much beats anything Duane Allman or Van Halen ever did with their axes.

Christopher Hitchens on freedom of speech

Hitchens has had a falling-out with the Left over foreign intervention and the War on Terror,  but there are few who speak about American freedom of expression (Mother Jones‘s favorite amendment) as boldly or as passionately as he does. In this minute-and-a-half clip, the journalist reminds us of how we can so easily bail on our own liberty (context: the 2005 Muhammad cartoons controversy).

A bunch of shows aired episodes right after 9/11 dedicated to that day’s heroes and victims. But it was the foulmouthed boys of South Park who, surprisingly, delivered one of the most poignant messages. In the episode “Osama bin Laden Has Farty Pants,” the boys gather around a tiny American flag planted  upright in the sand. “America may have some problems,” Stan says, “but it’s our home, our team. And if you don’t want to root for your team, then you should get the hell out of the stadium.” Watch the full episode here.

Red Heat: Soviet propaganda American viewers can really get behind

This 1988 flick stars Arnold Schwarzenegger as a Soviet captain who teams up with an American detective (James Belushi) to track down a Russian drug lord. The movie does a superb tongue-in-cheek job of showing how close American Dirty Harry-types really were to KGB thugs. Despite being partially about a Russian, nothing starring the Governator could be anything but immensely pro-American. Here’s a scene that demonstrates just how much Arnold’s character cares about due process and “Miranda” rights in the US. (Drinking game tip: take an ironic shot of vodka for every time Arnold says something pro-Stalinist, and you’re guaranteed to wake up with the world’s most patriotic hangover.)

The late great comic Bill Hicks—the self-described “[Noam] Chomsky with dick jokes”—delivers a refreshing, vulgar rant calling out leaders who are, to paraphrase, screwing the country. In this video, Hicks goes off on CIA war crimes and the Reagan dark ages, but it somehow still feels fresh.

During a 1985 show, the Boss took a moment to get political with his audience and spoke of the decade’s hyper-jingoism. “You’re gonna need a lot of information to know what you’re gonna want to do… Blind faith in your leaders or in anything will get you killed.” He swiftly segues into the definitive cover of the Motown classic “War.”