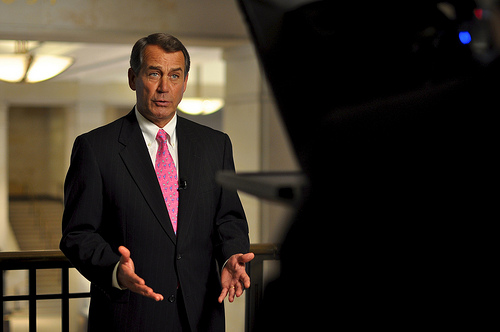 That plan, which is likely to die in the Democrat-controlled Senate today, would slash federal spending by $111 billion in the 2012 fiscal year, and go on to cap spending at about 20 percent of US gross domestic product. According to the Center for American Progress, “Cut, Cap, and Balance” would necessitate a 25-percent cut to every item in the federal budget, from defense spending to education to veterans’ benefits. And if, say, defense spending was spared, it would mean far deeper cuts to other federally funded programs.

Not surprisingly, the plan is anathema to Democrats—Senate Majority Leader Harry Reid (D-Nev.) called it “weak and senseless” and “perhaps some of the worst legislation in the history of this country.” The Senate voted to table “Cut, Cap, and Balance,” and also announced that it would not be in session this weekend.

In his remarks this morning, Boehner, joined by a group of GOP lawmakers, blasted Democrats for not offering a deficit reduction plan of their own. “If they don’t like our version of ‘Cut, Cap, and Balance’ that two-thirds of the American people support, then what’s their plan?” Boehner said. “Our friends across the aisle aren’t at all serious about doing what the American people are doing: spending less.”

Boehner’s flat rejection of any deficit deal with the White House, in exchange for raising the nation’s $14.3 trillion debt ceiling before the August 2 deadline, contradicts multiple news reports on Friday saying he and Obama were eyeing a $3 trillion deal. That supposed deal included trillions in spending cuts as well as new revenues from an overhaul of the tax code. (That likely means lowering rates but expanding the tax base, not tax hikes, which GOPers won’t accept.)

Now, the fate of any deal at all is up in the air. Boehner says he’s “keeping lines of communication” open with the Democrats, who are fuming over rumors of an Obama-Boehner deal seen as too favorable to Republicans. Senate Minority Leader Mitch McConnell (R-Ky.) still has a last-ditch plan on the table that would let Obama increase the debt ceiling but prevent political blowback on Republicans—a deal House GOPers dislike. And the White House is keeping its cards close to the vest.

Last month, the White House said July 22 was the deadline to cut an agreement to slash spending and raise new revenues in exchange for raising the debt ceiling before the US defaults. Well, today is that day, and it appears a gaping chasm still exists between the White House and Republicans.