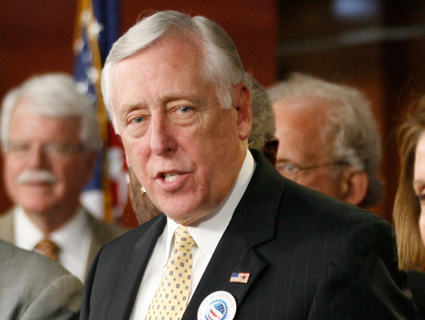 Fiscal hawks in the House of Representatives, take heart: next week, Speaker John Boehner (R-Ohio) and Majority Leader Eric Cantor (R-Va.) will bring House Judiciary Committee Resolution No. 1 to a vote. The Republican-backed measure would require Congress to pass a balanced budget every year, but it also caps spending at 18 percent of gross domestic product (GDP) and renders it extremely difficult for either chamber to pass new spending measures.

In real terms, that would mean ghastly cuts to Medicare and Medicaid—”programs that form the heart of America’s social compact,” according to Rep. Steny Hoyer (D-Md.)—and complete budget paralysis. Essentially, the bill neuters Congress’ ability to be prepared to any future crises, fiscal or otherwise.

So on Wednesday, Democrats fired back. Hoyer, the Democratic whip, announced plans to rally votes to defeat the measure next week, The Hill reports. That shouldn’t come as a huge surprise to Republicans, who need at least 48 Democratic votes to reach the two-thirds majority in the House required to pass the bill.1

“By enshrining Republican policy priorities in the Constitution—and by making it historically difficult to raise revenue or raise the debt ceiling in order to pay our bills—the Republican amendment would impose severe hardship on millions of Americans,” Hoyer said.

The balanced budget amendment might give Cantor and Boehner much-needed political insulation if they end up caving on tax increases in a deal to increase the debt ceiling. But given the tea party’s impressive vindictive streak, I wouldn’t bet on it.

1: Why two-thirds? Because of a procedure known as suspension of rules. Under this procedure, the Speaker of the House or his chosen designee can make a motion to “suspend the rules,” limiting debate to 40 minutes and preventing any amendments from being offered to a piece of legislation. Usually, a suspension motion is written to both suspend the rules and pass the bill under consideration—meaning that once the motion passes, the bill is considered to have passed the House as well. To win passage, the motion must receive affirmative votes from two-thirds of the members present and voting.

But a suspension of the rules is usually invoked only on non-controversial legislation that enjoys broad bipartisan support. Which, it seems safe to say, the balanced budget amendment is not.