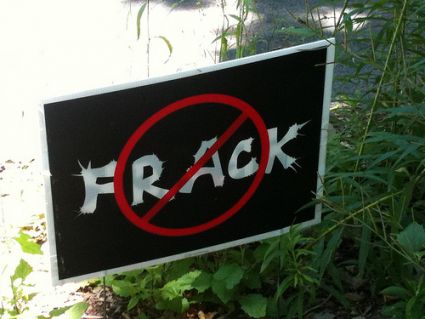 It’s been a busy week for anyone following the national debates over hydraulic fracturing, or “fracking,” the controversial method used to cut into shale rock to extract natural gas. In New Jersey, a strong bipartisan majority in both chambers of the legislature approved a bill banning fracking in the state as its neighbor to the north, New York, appeared ready to end its moratorium on the practice.

The New York Times reported Thursday that on July 1, New York Gov. Andrew Cuomo is expected to lift a fracking moratorium, which former Gov. David Patterson issued in an executive order last December amid concerns that the use of a high-pressure mixture of chemicals and water used to tap the rock could lead to groundwater contamination. While it was described in press accounts as Cuomo “lifting” the ban, he’s actually just letting the ban expire; it was temporary anyway, and was put in place while the state awaited the results of an environmental review, as ProPublica explains.

The state’s Department of Environmental Conservation intends to issue a draft environmental review with recommendations on how to proceed to the governor on Friday. In its press release, the DEC indicated that it will recommend that high-volume fracking be banned in the New York City and Syracuse watersheds, within primary aquifers and 500 feet of their boundaries, and on state-owned land—which still leaves about 85 percent of the state’s land open to fracking. There will be a 60-day public comment period beginning in August, so it will be months before fracking could actually proceed in the state.

Environmental groups aren’t likely to take kindly to the proposed rules, as it still leaves much of the Marcellus Shale open for fracking. “It seems like there’s an attempt to carve up the state, sparing certain places while turning others into sacrifice zone,” said Claire Sandberg, executive director of Frack Action in New Paltz, NY. “We want to see a full and permanent state-wide ban.”

New York, which sits on a significant portion of the Marcellus Shale, has been ground zero for debates over fracking. New Jersey, though, hasn’t seen the rush to development. A portion of the northwestern part of the state lies on the Utica Shale, which is deeper than the Marcellus and not a target for natural gas developers at this point (though it could possibly be of interest in the future). This makes Wednesday’s vote in New Jersey largely a symbolic move, but its sponsors hope it resonates in neighboring states. “We want to send a strong message that we don’t want to poison our drinking water,” said Assemblywoman Connie Wagner (D), who sponsored the bill in the Assembly.

The bill passed by large margins in both chambers: 32-1 in the Senate and 56-11 in the Assembly. It also had pretty strong support accross party lines. “It’s a terrible practice, which has great potential to do irreparable harm to the water supply system,” said State Sen. Christopher “Kip” Bateman, a Republican who cosponsored the measure. “It’s a practice that should be outright banned nationwide.”

Bateman couldn’t say whether Gov. Christie is going to sign the bill into law. If he does, New Jersey would become the first state in the country to formally ban the practice. “If he’s smart he’ll sign it,” said Bateman.