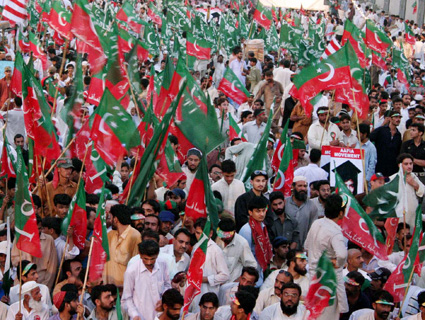 Supporters of Tehreek-e-Insaf (PTI) sit-in protest against US drone attacks, at Netty Jetty Bridge in Karachi, Pakistan on May 21, 2011. PPI/Zuma

2011 hasn’t exactly been a banner year for US-Pakistan relations. Now comes this: on Tuesday, the Department of Justice charged two US citizens with participating in a long-running conspiracy to act as agents of the Pakistani government in the United States.

The DOJ alleges that Syed Ghulam Nabi Fai and Zaheer Ahmad have spent over two decades working as agents of a foreign entity (in this case, Pakistan) without registering as required under the Foreign Agents Registration Act (FARA). According to an affidavit filed in federal court on Tuesday, Fai serves as the director of the Washington, DC-based Kashmiri American Council (KAC), an NGO that supposedly lobbies Congress on the issue of self-determination for the region. The group’s purported aim was to target members of Congress and draw media attention to the issue of the Kashmir, the disputed region between India and Pakistan that has been wracked by bloody violence and served as a hotbed for insurgency for decades. But the US government doesn’t buy that.

The DOJ claims that KAC is nothing more than a front group for the Pakistani government and its spy service, the Inter-Services Intelligence Agency (ISI). Witnesses told investigators that, since the mid-1990s, KAC has helped launder some $4 million through Fai to lobby for Pakistani interests. That money, the affidavit alleges, was transferred to Fai via Ahmad and his networks in Pakistan.

ProPublica reports that Fai himself has donated $23,000 to congressional candidates, including $7,500 to Rep. Dan Burton (R-Ind.), and $2,000 to Rep. Joe Pitts (R-Penn.), Both men are frequent critics of India’s Kashmir policy. (The DOJ says there’s no evidence that any elected officials who received money from Fai or KAC knew that it came from Pakistan.)

Fai was arrested Tuesday morning, but Ahmad remains at large, and is believed to be in Pakistan. Both men face a five-year prison sentence if convicted—a surprisingly light penalty given the depth of the evidence against them, ProPublica notes.

Also notable is the DOJ’s chosen vehicle for moving against Fai, Ahmad, and Pakistan: FARA. The law requires lobbyists for foreign countries to register as such. But it’s rarely enforced: since Congress raised the burden of proof for federal prosecutors in 1966, only three FARA-related indictments have been handed down, resulting in zero successful criminal prosecutions. As Mother Jones reported back in March, the Boston-based Monitor Group likely violated FARA by failing to register the work it did for the Qaddafi regime in Libya. Monitor retroactively registered, and no criminal investigations have followed. Given the DOJ’s traditional reluctance to enforce FARA, its use of the law in this case is telling.

The US still feels it can’t cut and run on Pakistan. But its aggressive actions this year—including the fallout from the Raymond Davis affair, the unprecedented indictment of an ISI officer in a Chicago court, the decision to withhold $800 million in aid to the country’s military, and, of course, the killing of Osama bin Laden deep in the heart of Pakistan—suggest that while it appears the overall game hasn’t changed, the US is now prepared to hold Pakistan to some level of accountability.

The message: Play us, and we’ll play you.