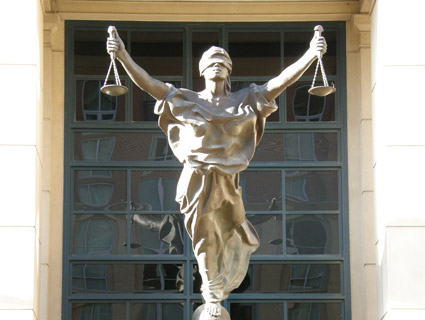 Legal assistance for the poor will take a huge hit under a proposal just released by the House Appropriations Committee, which aims to slash the budget of the Legal Services Corporation back to 1999 levels. Officials at LSC, which has been around for four decades and supports 136 independent legal-aid outposts all over America, knew big cuts were coming—the program was by no means exempt from DC’s budget-slashing hysteria. But supporters were betting on losing $70 million, the figure proposed last year during budget negotiations.

The new proposal would take away $104 million—26 percent of the program’s resources—at a time when demand is soaring. Legal-aid offices from Texas to Maine report that the need for their services already has been outstripping funding for years.

“Demand is just going to keep going up. People are still losing their jobs. People are still struggling to put food on the table. Foreclosures are still happening,” says Cynthia Martinez, spokeswoman for Texas RioGrande Legal Aid, the state’s largest legal-services agency. “Last year, we had to turn away half of the people that came to us because we just don’t have the resources. And it’s not like when we say no, the legal problems just go away.”

You’ll hear similar stories nationwide. “We know that in February we were only able to handle about 20 percent of the calls that were actually tracked on our voicemail system, in one office location,” said Nan Heald, executive director of Pine Tree Legal Assistance, Maine’s largest legal-services provider. “And a lot of people don’t even get through on the phones because they’re busy.”

More of those who do get through, Heald says, “are getting limited service rather than full representation, because we’re trying to manage the demand with reduced staff.” She has lost seven staffers since 2009. It’s not just the federal cuts that are hurting these agencies. “We get foundations, we get individual donations, state grants, state funding. All of our funding sources are dropping,” Heald adds.

In Texas, a bill providing $20 million for legal services was passed only after a major fight in the state legislature, and Gov. Rick Perry has yet to sign it. In Florida, renowned for its “rocket-docket” foreclosure courts, Gov. Rick Scott vetoed a bill providing $1 million in funding for legal aid, despite broad bipartisan support.

Another key funding source for legal services comes through interest on lawyers’ trust accounts. When a lawyer wins a cash settlement for a client, the money often goes into a pooled account before it’s paid out. The interest on that money is used to support civil legal services. But with interest rates plummeting, that revenue source has also been gutted.

Already, the legal-aid nonprofits supported by the LSC are slated to lose a total of 445 staff members, including 200 lawyers, by the end of 2011, according to a survey of the groups. Last year, 63 million people—an all-time high—qualified for their help, an increase of 11 percent from the year before. “This is not the time to undercut the fundamental American commitment to equal justice for all,” says Legal Services president James Sandman.

“There is never a convenient time to make tough decisions,” counters Frank Wolf, chair of the House subcommittee responsible for the LSC’s budget. “But the longer we put off fixing the problem, the worse the medicine will be…The bill represents our best take on matching needs with scarce resources.”

Heald says she understands the need to cut spending, but explains that legal services has a “preventive effect” that actually saves money for the states. Housing a family in a homeless shelter in Maine for just two or three weeks is five to ten times more expensive than supporting a lawyer who can help keep the family in stable housing, she says. “And that’s just the cost of the shelter nights, and not the cost on all the other supportive systems a family might need.”

“I think it’s important to have the full picture, and not to see just part of it,” she adds.

For now, the hopes of the legal aid community hinge on the Senate. “We’re hopeful that things will continue to be okay, and we’re not going to face these major cuts,” said Linda Perle, director of legal services at the DC-based Center for Law and Social Policy. “But that might just be wishful thinking.”

If the proposed cuts do take effect, the LSC estimates that 235,000 people eligible for help will be turned away. And that will have a direct impact on vulnerable Americans, Rodriguez says.

“It means that more people won’t have the support they need,” she says, “to assert their rights in desperate situations.”