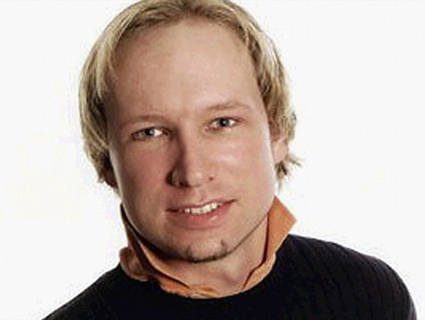 Anders Behring Breivik, charged in connection with Friday’s horrific bombing and shootings in Norway, left clues to his motivation at an anti-Muslim website called Document.no. In the entries below—culled and translated by the British magazine Searchlight—Breivik is fixated on what he believes is the creeping evil of Islam in Europe. He argues for setting up a system of social networking “such that is linked to similar organizations in other countries (similar to a beginning of a cultural Euro-version of a Tea Party movement).” He complains that Europe lost the Cold War by 1950 and that the continent, especially Norway and Sweden, has been engulfed by Marxist attitudes, “while the old-established truths of patriotism and cultural conservatism today is branded as extremism.” He notes, “The European cultural conservative movement is small at the moment but we are growing every day.”

And then we have the relationship between conservative Muslims and so-called “moderate Muslims”. There is moderate Nazis, too, that does not support fumigation of rooms and Jews. But they’re still Nazis and will only sit and watch as the conservatives Nazis strike (if it ever happens). If we accept the moderate Nazis as long as they distance themselves from the fumigation of rooms and Jews?….For me it is very hypocritical to treat Muslims, Nazis and Marxists differ. They are all supporters of hate-ideologies. Not all Muslims, Nazis and Marxists are conservative, most are moderate. But does it matter? A moderate Nazi might, after having experienced fraud, choose to be conservative. A moderate Muslim can, after being refused to enter a club, be conservative, etc.

…How many thousands of new Europeans must die, how many one hundred thousand European women should be raped, millions robbed and tractor discarded before you understand that multiculturalism + Islam does not work?

He’s has no tolerance for Marxists:

Had Western Europe and the U.S. decided to imprison all Marxists (Nazis and Marxists) after WW2 and swearing Marxist principles of hate ideology similar to Nazism, we had never been in the current situation.

He’s a critic of the modern Protestant church:

Today’s Protestant church is a joke. Priests in jeans who march for Palestine and churches that look like the minimalist shopping centers. I am a supporter of an indirect collective conversion of the Protestant church back to the Catholic. In the meantime, I vote for the most conservative candidates in church elections.

And this fellow accused of killing scores at a youth camp claims to be concerned for the youth of Norway:

I dare not even think of how many Norwegian children who have been suicide because of these experiences (assault, robbery, rape, psychological terror committed by Muslim youths). There are probably several hundred in the last 15 years.

….Non-Muslim youth in Oslo aged 12-18 are in a particularly vulnerable situation in terms of harassment [from] Muslim youth.

The document below came to us via the US-based Institute for Research & Education on Human Rights, a human rights group that tracks the far right in the US and abroad. The English translation is a bit rough in some portions, but the meaning is usually clear—too clear.