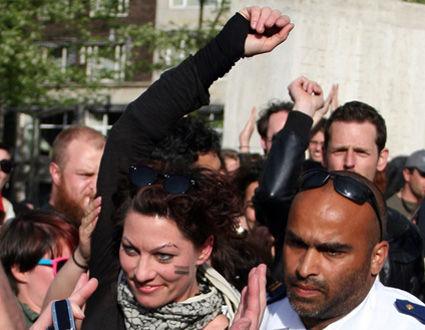 Amanda Palmer is not an artist so much as an event. Probably best known as the former front woman for punk cabaret duo The Dresden Dolls, she’s also a street performer, director, composer, blogger, and the unhinged virtuoso of fucking bring-it. After a heated battle with Roadrunner, her former label, Palmer has turned into a crusader for DIY music distribution. She now relies on her wits, her Twits (she’s up to 517,000 followers on Twitter), and her loyal, creative fanbase to keep her rocking. Not to mention fan donations on her website, or music-making pledge campaigns on sites like Kickstarter.

Not too long ago, Huffington Post dubbed Palmer the “Social Media Queen of Rock-N-Roll”—her awesomeness in that realm is perhaps best encapuslated by her performance at The Shorty Awards, where she compiled and sang the year’s most amusing tweets from the likes of Kanye West, Paris Hilton, and Beaker from the Muppets.

When she’s not on the interwebs, Palmer tours relentlessly (New England and Europe this summer), and she recently collaborated on a project called 8in8 with Ben Folds, OK Go’s Damian Kulash (we interview him here), and Palmer’s husband, the author Neil Gaiman. In short, they tried to create and record eight songs in eight hours—and ended up with six songs in twelve hours, but still. Prior to that, Palmer released Amanda Palmer Goes Down Under, an Australia tribute featuring a cheeky homage to pubic hair, “Map of Tasmania,” which you can watch below.

I reached out to Ms. Palmer on Twitter (of course), and she agreed to talk after I promised to take her on a dive bar date to find a Russian cyclops. For the record, I didn’t actually ask her to do the interview in her bra, but, you know, you’re welcome. Click on the questions in blue to watch Palmer’s answers.