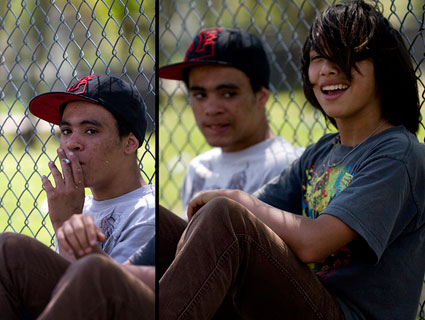 Listen up, young would-be vandals: SonicScreen, a new device designed to keep muskrats and miscreants out of family-friendly spaces could be headed for a playground, park, or schoolyard near you.

The device generates a modulated high-frequency tone that Jay Webber, who has installed these devices, claims can only be heard by people in the 13- to 25-year-old age range. A motion sensor detects your possibly pubescent presence and emits this harmless-but-abrasive signal until you get away from the monkey bars—or wherever you’re not wanted. “For young people, it sounds like 15 or 20 people dragging their nails down a chalkboard,” Webber told the Pioneer Press, a daily newspaper in Twin Cities, Minnesota.

City officials in Hastings, Minnesota, are currently debating whether to buy the $7,000 device, but they aren’t the first in the US to do so. Moving Sound Technologies installed its own version in Washington, DC’s Gallery Place Metro station. It received mixed results and was eventually removed after David Moss of the National Youth Rights Association filed a complaint with the DC Office of Human Rights. There are similar products in the European market such as the Mosquito Alarm, installed in front of shops to discourage loiterers. Youth advocacy critics find the device discriminatory, anti-teen, and an inappropriate strategy. In the UK, a government-appointed children’s commissioner even launched a campaign called Buzz Off, aimed at banning the Mosquito Alarm.

Moss lodged a similar complaint against the proposed SonicScreen installation in Hastings, claiming that the device “lacks precision and can affect a wide variety of innocents,” especially “autistic children and children with special hearing needs.” Children’s Rights Alliance, a London-based youth-empowerment lobbying group set up after the ratification of the UN Convention on the Rights of the Child, reports that these high-frequency soundwaves harm young ears—and that children from 8 to 13 have reported that the sound wakes them up at night.

Installing SonicScreen, of course, is no panacea for loiterers and vandals and fails to address the root ill conveniently toetipped by a technological fix. Vandalism is an expensive local problem and needs creative solutions. Yet, vandalism is by no means limited to teenagers, and the SonicScreen cannot stop the 26 and up age set from wreaking havoc if they so choose.

In urban areas, public spaces are scarce enough as it is, and youngsters need places away from the watchful eyes of their helicopter parents. Installing such devices may even be an incentive to vandalize—certainly the device, if not everything in the vicinity. In 2004, when I was fined for being too young to sit on a fountain outside a galleria mall, the thought certainly flashed through my mind. In any case, communities had better prepare for teen rebellion if they start installing these gadgets on every street corner.