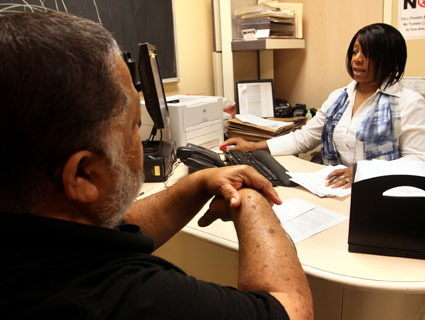 Dear struggling states: things are bad, getting worse, and there’s no end in sight. That’s the general thrust behind a report published this week by the Center on Budget and Policy Priorities. The study looks at the impact of savage cuts in FY 2012 state budgets around the country. Of the 32 spending bills enacted so far—most of which go into effect on Friday—as least 24 of them essentially gut public service spending.

In the cuts, there’s a little of something for the austerity fiend in everyone. For the anti-entitlement crowd:

• Arizona is eliminating Medicaid coverage for 130,000 adults without children, freezing Medicaid enrollment for all other childless adults, and setting in motion a phase-out of the 150,000 childless beneficiaries still enrolled.

Meanwhile, Florida’s ripping a page out of the Scott Walker playbook and taking its budgetary woes out on public workers (and poor kids):

• Florida is terminating employment for 1,300 public employees, reducing Medicaid payment rates by 12 percent for most hospitals, and cutting 15,000 children from a school readiness program that helps low-income families obtain high quality child care, among many other cuts.

And speaking of Wisconsin:

While the recession certainly bears its fair share of the blame, some states, including Georgia and Arizona, recently enacted irresponsible tax cuts for businesses and the wealthy while further widening tax loopholes that lapped up potential government revenue. Arizona, for example, cut corporate income tax rates and commercial property taxes, voluntarily forgoing $38 million in potential revenue for 2012. That amounts to 4 percent of the state’s 2012 budget shortfall, according to CBPP’s number crunchers.

So is the Obama administration to blame? States did receive $165 billion in stimulus money over the past two-and-a-half-years to help them avoid some spending cuts and tax increases. But most of that funding officially dries up today. CBPP recommends that the federal government help out the most vulnerable by extending emergency Medicaid funding to struggling states. The odds of that happening, though, are laughable, given the anti-spending mood in the Republican-run House of Representatives.

Meanwhile, whatever debt ceiling compromise emerges in the coming weeks is almost certain to exacerbate states’ problems. Seems there’s more than enough blame to go around.