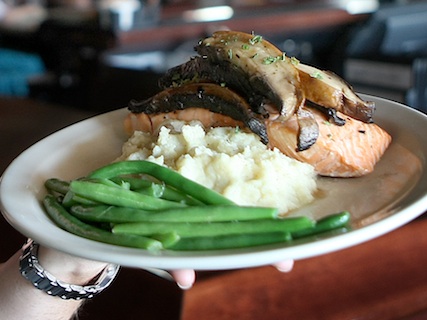 The House just served up a surprise treat for the FDA. Bill Ingram/The Palm Beach Post/Zuma

Over on Gilt Taste a while back, the eminent fisheries writer Paul Greenberg gutted and fileted the rationale for a novel type of farmed salmon genetically altered to grow faster. The “improved” fish, created by a Massachusetts-based company called AquaBounty Technologies, threatens to “escape and contaminate wild populations of salmon,” Greenberg wrote. And the business model AquaBounty has in mind is ecologically insane: “the fish requires much wasteful transport since it would be cloned in Canada, grown in Panama and then flown back to the US for consumption.” On top of those obvious drawbacks, the GMO salmon literally offers no benefits to the environment or consumers. “It is completely unnecessary,” he concludes. Its only rationale is economic—as defined narrowly by the interests of AquaBounty’ shareholders. Greenberg writes:

It seems to me that what the AquaBounty AquAdvantage salmon represents is the privatization of the salmon genome. Should salmon farming come to be dominated by the AquAdvantage fish, farmers could become dependent on a single company for their stock, just as soy, corn and wheat farmers must now rely on large multinationals like Monsanto to provide seed for their fields year in and year out. AquaBounty will literally own salmon farming.

Despite all of this, the FDA is currently deliberating on whether to greenlight AquaBounty’s dubious masterpiece—and is widely expected to do just that sometime this year. That is, unless resistance from an unlikely quarter, the Republican-controlled US House, prevails. Associated Press:

Rep. Don Young, R-Alaska, offered an amendment to a farm spending bill late Wednesday that would prohibit the FDA from spending money to approve AquaBounty’s application. The amendment was approved by voice vote.

Now, the good Rep. Brown was not acting on high principle, attempting to protect the environment and consumers from a product that will likely generate much more harm than good. Rather, he was baldly protecting constituents’ economic interests. “Young argued that the modified fish would compete with wild salmon in his state,” AP reports.

As much as I want to applaud it, the move marks a potentially dangerous precedent. If Congress can block regulatory agencies from approving products on the basis of harming narrow economic interests, it can also block agencies from enforcing regulations that harm those same interests. Do we want to live in a world where Congress intervenes to, say, force the EPA to approve a nasty pesticide just because its maker gives cash to some backbencher? Agencies like the FDA and USDA, riddled as they are by industry influence, would be much better positioned to fight off such challenges if they actually did their jobs and protected the public interest. In this case, that would mean forcing AquaBounty to keep its dodgy fish out of the marketplace—based on the merits of the case.