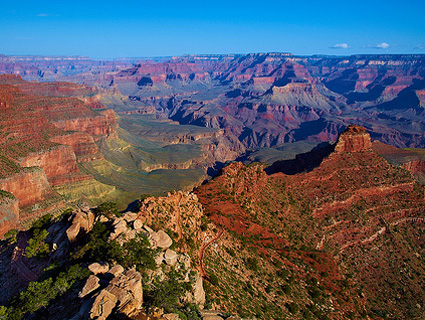 The uranium-rich land around the Grand Canyon has been given another stay of execution by Secretary of the Interior Ken Salazar. On Monday, Salazar extended a two-year moratorium on mining in the area for another six months, buying time for the Bureau of Land Management to work through the final stages of evaluating a plan for long-term withdrawal (which, when approved, will put the kibosh on new mining activity in the region for the next twenty years).

In romantic, grandiose language, Salazar implored his opponents on this issue to think of our natural resources in a greater historical context. Speaking from an amphitheater on the Canyon’s south rim, Salazar invoked Grand Canyon explorer John Wesley Powell and Teddy Roosevelt in making his case to let the land be:

To be here—for John Wesley Powell or for any of us—is to be overwhelmed and humbled by the scale of geologic time.  The minutes, hours, and days by which we measure our lives are hardly an instant in the life of these canyons. Yet, all of us—by the decisions we make in our short time here—can alter the grandeur of this place…As Teddy Roosevelt famously implored from this very place: “Leave it as it is. You cannot improve on it. The ages have been at work on it, and man can only mar it.”

Salazar first initiated a moratorium on the toxic uranium mining in July 2009. Concerns about contamination of the Colorado River watershed, tourism, maintaining the Canyon’s beauty, and preseveration of tribal lands all played into the initial ban. Exposure to uranium has been known to increase lung and bone cancers, can cause kidney damage, and abandoned mines have caused widespread problems for members of the Navajo Nation in Arizona. Still, uranium mining in the area has its backers, like Rep. Robert Bishop, R-Ariz. Salazar has become familiar enough with the Bishop ilk’s qualms—in his speech, he did his best to preempt accusations about failure to develop uranium:

First, I know some critics will falsely claim that with a full one-million acre withdrawal from new hard rock mining claims, we would somehow be denying all access to uranium resources. That, of course, is not true.  Uranium, like oil and gas, solar, wind, geothermal, and other sources, remains a vital component of a responsible and comprehensive energy strategy.  We will continue to develop uranium in northern Arizona, Wyoming and other places across the country.

Many groups have already issued statements in support of Salazar’s decision. The National Parks Conservation Association applauded the action via press release, stating: “This announcement is wonderful news for the millions of people who live near and visit the Grand Canyon each year, as well as the tens of millions more across our nation who believe the integrity and natural state of this awe-inspiring location should not be compromised.”

Rep. Raul M. Grijalva, D-Ariz., a long-time opponent of mining near the Canyon, was also buoyed by the news. Grijalva, the ranking member of the House Subcommittee on National Parks, Forests and Public Land, has been proposing bills to withdraw the land from hardrock mining in Congress since 2008. “I couldn’t be happier,” said Grijalva, who was present for the announcement.  “This withdrawal would protect the economy, the environment and the crown jewel of our national parks system for decades to come.”