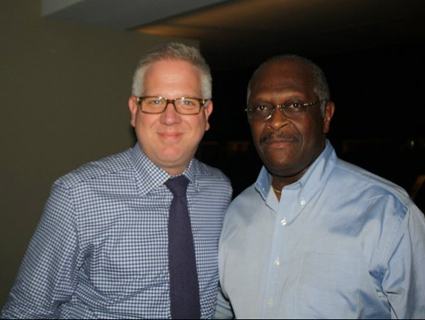 While we’re on the subject of pizza tycoons, GOP presidential candidate and former Godfather’s CEO Herman Cain was asked yesterday how he’d approach his duties as Commander in Chief if elected. Would his lack of experience and professed ignorance of foreign policy issues be a problem? It would not be a problem, Cain says. Per the Daily Caller:

Herman Cain, the former CEO of Godfather’s Pizza running for president, said he’s suited to make hard foreign policy decisions because he made tough calls as a businessman.

“When I first became president of Godfather’s Pizza, there was a very dangerous part of town in the black community where I wouldn’t allow my restaurants to deliver because we had kids beat, robbed,” he said in an interview outside a pizza joint here Sunday.

“And I said ‘if I won’t send my son over there, I’m not going to send someone else’s son or daughter over there.’ Last week in Omaha, Nebraska, that same neighborhood that I wouldn’t deliver in—that they are delivering in now—a Pizza Hut driver was killed.”

As it happens, many of the places American troops are deployed are places where American parents wouldn’t want their kids to be. That’s because the decision to enter a war zone—where the loss of human life is an assumed risk—is a lot different than the decision to deliver pizza to the wrong side of the tracks. There was a time where sending a teenager to Omaha constituted a daring military decision, but those days are thankfully over.

For Cain, meanwhile, foreign policy has quickly and predictably emerged as his most obvious weakness as a candidate. He has demonstrated (and confessed to) a lack of knowledge about the rest of the countries in the world, telling the Christian Broadcasting Network’s David Brody last week that foreign policy is “an area that I have not focused on because when I was doing on my radio show, foreign affairs didn’t come up that often in terms of what my listeners wanted.” Despite making support for Israel the centerpiece of his campaign, he was not familiar with the concept of Palestinian “right of return”; despite the fact that American forces have been in Afghanistan for more than nine years, he isn’t really sure what he thinks about the war there. On China, he is simultaneously blunt and ambiguous: “My China strategy is very simple: outgrow China.” On Sunday, Cain alleged that President Obama was raised in Kenya, which suggests that either Cain doesn’t know anything about President Obama’s upbringing but is talking about it anyway, or that he thinks Hawaii is Kenya.

This wouldn’t be such a big deal, except Cain believes that, more than any other living American, he is most qualified to serve as Commander in Chief. That’s looking like a tough sell.