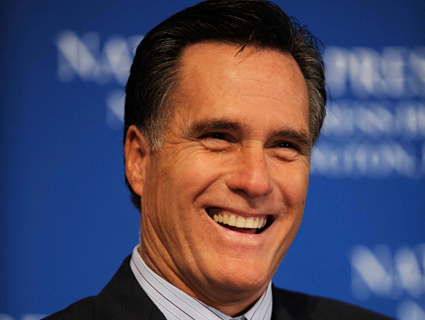 UPDATE: At 1:00 in the afternoon, Romney delivered his announcement speech at a New Hampshire farm, and he did say the line highlighted below.

According to the advance text of his speech—which his aides handed out to various media outfits to boost interest in Romney’s unsurprising declaration—Romney will proclaim that President Obama has “failed America.” He will blast Obama for expanding the size and reach of government. He will somberly state, “We are only inches away from ceasing to be a free market economy.”

Inches away? Is he kidding? Did Sarah Palin write this line for Romney?

Reporters should ask the former mandate-embracing governor of Massachusetts to back up this demagogic statement. Where is the free market grinding to a halt? Romney might be tempted to repeat the right-wing shibboleth that Obama’s health care overhaul is a “government takeover”—a sentiment Romney expressed recently when he gave a speech explaining (or defending or excusing) the health care reform he enacted in the Bay State. But Politifact.com rated this assertion 2010’s “Lie of the Year,” noting that the Obama plan relies on private insurance companies, and it awarded Romney its “pants on fire” rating for recycling the “takeover” line last month.

So what other evidence might Romney submit to back up his claim that the free market economy is on the brink of destruction? American automakers are in a much better (and more competitive) position, due to Obama’s rescue plan. (Romney opposed the use of federal money to save Detroit.) Corporate and bank profits have been soaring in recent months. And the stock mark recovered from the losses brought about by the Bush-Cheney crash of 2008. If this be the end of our free market economy, titans of industry and investors may be tempted to embrace its demise.

The economic news for the rest of the nation, though, has indeed been not bright. The lead story of this morning’s Washington Post reports, “The economic recovery is faltering, and Washington is running out of ways to get it back on track.” Manufacturing and private-sector job creation have both slowed, while home prices are declining and consumer spending has slackened. All this, combined with the downgrade of Greece’s debt rating by Moody’s, sent stocks tumbling on Wednesday.

So Romney, the apparent GOP frontrunner, has plenty of cause to talk about the economy and to critique current policies. As a former business executive and past governor, he can boast experience concerning economic activity and government policy-making. In fact, of all the GOP candidates in the field, Romney has the most standing to challenge Obama’s economic actions (even if the company he led often brokered deals that resulted in job losses).

With his announcement speech, though, Romney is signaling that he’s not prepared to have an adult conversation that transcends the scoring of political points. Romney’s paramount responsibility as a presidential wannabe is to play to (or pander to) Republican primary voters. In the past, he has demonstrated how far he’s willing to go in that regard by trading in his moderate/liberal positions on abortion, gay rights, and gun control for the traditional GOP stances on these matters. Issuing over-the-top assertions about the economy is not a stretch for him.

Yet these challenging times deserve serious discourse—especially on economic matters. The Republicans are pushing the notion that drastically reducing government spending is the cure for what ails the economy. Conventional economists disagree. With overall demand lagging, they say, now’s not the time to downsize government-driven demand. That is, not if you care about boosting (or maintaining) economic activity and creating (or saving) jobs. How this debate turns out will affect the fortunes of millions of working Americans—and of the nation itself.

Romney can play an important role in this debate. If there’s a fact-based and reasonable case to be made for the Republican position, he’s the ex-CEO for the job. But such a conversation needs to be free of demagoguery—or, at least, free of excessive demagoguery. But when his audience is red-meat-hungry Republican primary voters and caucus attendees, Romney is not going to trim the excess.

The nation’s free market economy is not on the verge of extinction. (Oh, look, here come the collectivists!) Romney must know that. Yet his willingness to utter such an extreme, fear-laden remark shows he’s eager to tap the paranoid, Obama-is-destroying-America sentiment rife within Republican ranks. You might even say that Romney has drunk the tea.