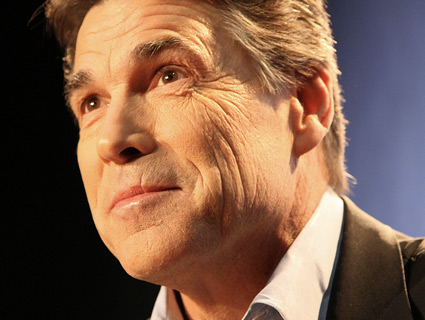 By all appearances, Texas Governor Rick Perry is edging closer to a presidential run. His wife wants him to jump into the race and so do the big money guys in New York. Also enthused by the idea were attendees of last weekend’s Republican Leadership Conference, where the crowd chanted, “Run, Rick, Run!” But despite everything that Perry’s got going for him—a strong state economy, great hair, bible-thumping bona fides, and more than a decade as a sitting governor—he also has a lengthy track record of gaffes, controversial remarks, and dubious dealings. Here are some of the most notable:

Shady home sale: With the help of well-placed friends, Perry earned nearly $500,000 in questionable profits from a waterfront home in Horseshoe Bay, Texas, the Dallas Morning News revealed last year. Doug Jaffe, a prominent political powerbroker, sold the house in 2001 to a Perry friend and political ally who passed it on to the Governor for $300,000, two-thirds of its true market value. Six years later, Perry sold it to a friend and business associate of Jaffe for $350,000 above its market value—a cool $1.3 million.

A builder’s best friend: In June, 2003, Perry helped push through a bill creating the Texas Residential Construction Commission, a new government agency that was supposed to protect homebuyers from unethical builders. In reality, the bill was written by the housing industry with the help of John Krugh, a lobbyist for the homebuilder and GOP money man Bob Perry (no relation). That September, after getting a $100,000 check from Perry, the Governor appointed Krugh to the TRCC. Consumer groups fought back and got the agency abolished in 2009.

A road to nowhere: In 2003, Perry proposed the Trans-Texas Corridor, a 4,000-mile mega-highway that would have destroyed 500,000 acres of farmland while enriching a handful of politically-connected toll road operators. After the state spent nearly $60 million on the plan, overwhelming public opposition killed it.

Hands off: In 2004, whistleblowers repeatedly informed Perry’s office that the Governor’s Texas Youth Commission hires and protects “known child abusers.”  His office ignored the warnings. Three years later, the story broke that top officials with the TYC had learned of and done nothing to stop widespread child molestation at a juvenile detention facility in West Texas.

Texas justice?: In February, 2004, Perry refused to stay the execution of Cameron Todd Willingham, a death-row inmate who was almost certainly innocent. Perry later refused to release documents related to his decision and abruptly replaced three members of a commission that was investigating the case.

Nader raider?: Perry’s political associates, including top adviser Dave Carney, have been repeatedly accused of helping the Green Party qualify for the ballot in order to siphon votes away from Democratic candidates.

A shot in the arm: In 2007, Perry bypassed the state legislature and signed an executive order making Texas the only state in the nation to require 6th grade girls to receive a vaccination against a sexually-transmitted virus that causes cervical cancer. At the time, Perry’s former chief of staff, Mike Toomey, was a lobbyist for Merck, the manufacturer of the vaccine. When conservative Christians protested, the legislature repealed his order.

The stimulus two-step: In March, 2009, Perry refused $555 million in stimulus money that would have funded unemployment benefits. The move backfired four months later when Perry asked the federal government for a $170 million loan to cover his state’s dwindling unemployment funds.

If at first you don’t secede: At a tea party rally in April, 2009, Perry said: “We’ve got a great Union. There’s absolutely no reason to dissolve it. But if Washington continues to thumb their nose at the American people, you know, who knows what might come out of that?”

Crony capitalism: Perry has used the state’s Emerging Technologies Fund to benefit political allies. According to the Dallas Morning News, $16 million from the fund, or nearly 10 percent, has been awarded to companies with investors or officers that are large campaign donors to Perry.

Getting Wasted: Perry has accepted $1.2 million from Texas billionaire Harold Simmons, who is building a nuclear waste dump in West Texas over the objections of some of the state’s own environmental regulators. In January, Texas’ Low-Level Radioactive Waste Disposal Compact Commission opened the door to allowing the dump to accept nuclear waste from around the country. Six of of the commission’s seven members were appointed by Perry.

Juarez, Texas?: Earlier this year, Perry told reporters that “Juarez is reported to be the most dangerous city in America.”