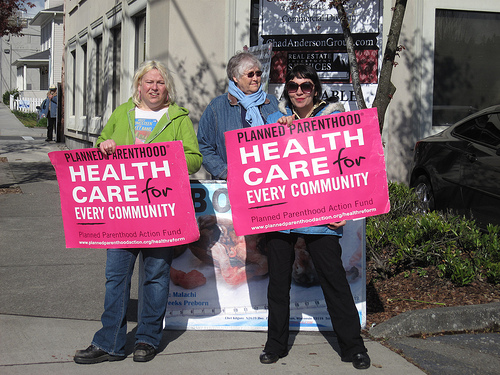 By Friday, Kansas could be the first state to effectively make legal abortion inaccessible within its borders. Drawing less attention, though, is the fact that the state is also on a mission to put Planned Parenthood out of business there entirely, after also passing a new law that cuts off public funding to the group’s reproductive health clinics.

So far, none of the three clinics in the state that provide abortions have been granted a license to continue operating, as the Kansas City Star reports. Our own Maddie Oatman reported Tuesday that one of the clinics has filed suit to stop the new rules. But among the litany of anti-abortion bills passed in Kansas this year was also one that cuts off federal Title X family planning funding for Planned Parenthood, a move that could limit services at the organization’s two health centers in the state. (Title X is a federal program, but it provides grants to state and regional health departments which in turn administer them to service providers.) The two offices—in Wichita and Hayes—don’t provide abortions at all. They provide health screenings, contraception, and educational resources, and in most years, between 40 and 60 percent of their funding comes through Title X, says Peter Brownlie, the president of Planned Parenthood of Kansas and Mid-Missouri.

On Monday, the group filed suit in the federal district court in Kansas City to prevent the enforcement of the defunding legislation. The two clinics see 5,600 patients per year, and the denial of Title X funds would most likely mean that they have to do away with the sliding scale fee that they currently charged based on a patient’s income. That has allowed them to provide their services at little or no charge for people at poverty level or below, says Brownlie.

“We’re going to continue to make every effort to keep them open,” he told Mother Jones last week. Meanwhile, the group is also fighting the new abortion clinic regulations that threaten to close their other office in Overland Park, Kansas, where they do provide abortion services.

The Kansas Planned Parenthood situation is a little bit different than Indiana’s, where the state legislature voted in April to block Medicaid funds from being used at the clinics. The feds declared the move illegal because it discriminates against specific health care providers, and last Friday a US District Court judge granted an injunction to stop the law from taking effect in the state. (The Indiana attorney general has filed an appeal, but as of Saturday, Planned Parenthood is again accepting Medicaid patients.)

Other states have followed the lead of Indiana and Kansas. North Carolina passed a bill earlier this month blocking funding to the group over the governor’s veto, and Texas is on track to sign a similar measure into law this week. While anti-abortion lawmakers may have lost their battle to end funding for PP at the federal level earlier this year, they’ve been able to chalk up several wins at the state level.