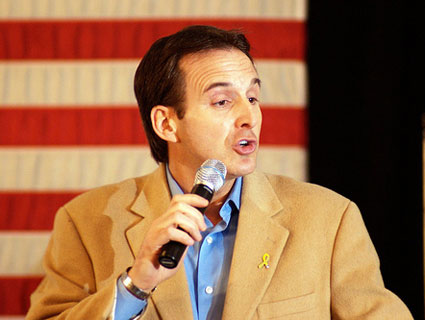 Is Republican presidential candidate Tim Pawlenty secretly pro-choice? That’s what a long-time acquaintance maintained today in an MinnPost op-ed. Shawn Lawrence Otto, a Hollywood filmmaker, writes that in the late 1990s he was considering a run for public office and Pawlenty, an occasional golfing buddy, sat him down to offer some friendly advice—and that’s when the truth spilled out:

[Pawlenty’s] first question was, “What’s your position on choice?” I hadn’t ever been asked the question quite so pointedly. “You’ve got to take a stand on that first,” he said. “Well,” I said, “OK. I don’t like abortion; I think it’s a really tough personal decision, but not something the government should be getting into one way or the other, so I guess I’m pro-choice.”

He looked at me over his lunch and said, “Well personally, so am I, but here’s the thing. You’ve got to find a way to get your mind around the language of saying ‘pro-life.’ It’s in how you phrase it.”

That’s a sharp contrast to Pawlenty’s current rhetoric. Pawlenty has taken a strong stance on the campaign trail against abortion rights, raising money for pro-life groups and suggesting, through a spokesman, that doctors who perform abortions ought to face criminal penalties. And when he was governor of Minnesota, Pawlenty pushed for and signed a controversial 2003 law mandating a 24-hour waiting period for women seeking abortions. Last April, he issued a proclamation declaring a statewide “Abortion Recovery Month,” to raise “awareness of the aftermath of abortion experienced by individuals and families.”

But for Pawlenty, who is lagging in the polls in Iowa and struggling to shed a reputation as dull, the accusation that he’s flip-flopped on abortion—or been covertly pro-choice all along—could place another road block on his already difficult path to the GOP nomination. It would also, crucially, undermine one of the key distinctions between Pawlenty and front-runner Mitt Romney, who supported abortion rights during his 2002 Massachusetts gubernatorial campaign and has struggled to convince socially conservative voters he’s one of them.

Romney’s about-face on abortion (which paralleled reversals on gay rights and gun rights) has long caused social conservatives to be suspicious of his commitment to their causes, and in recent weeks he has received a poke or two from the right for not being a reliable abortion foe. (New-to-the-field contender Rep. Michele Bachmann, for one, has questioned Romney’s anti-abortion credentials.)

Will Otto’s article lead to similar problems for Pawlenty? Or will this be just a he-said/he-said matter that T-Paw can essentially ignore? Mother Jones contacted Pawlenty’s campaign to ask for a response to Otto’s piece. So far, there’s no reaction.