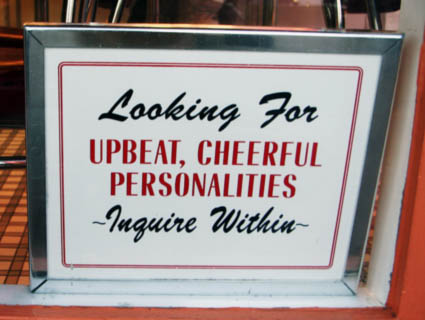 Let’s just dispense with the most disheartening things I heard yesterday from a career adviser: It’s much harder to find a job now than it was when I graduated from Ohio State University 10 years ago. Several years ago, most of the people coming to this Continuing Education Department were alumni who had careers but wanted new ones; now it’s mostly people who got laid off. Because the job market is so saturated with applicants, employers can be more demanding and picky. It’s important to find a job that you’re happy in because you’ll spend most of your life doing that, though admittedly everyone, even people who love their jobs, would prefer to not work.

I met Jeff Robek the other day at career-exploration workshop, one of many programs the Columbus Metropolitan Library has been offering since its librarians started getting overwhelmed with requests for job-search assistance in 2008. I made an appointment to talk with Robek, and while I was at it, I got myself job-counseled.

After all, it would be statistically surprising to no one if I got laid off. In that event, Robek would be a good person to talk to, because I’d probably have to move back to Ohio from San Francisco. I’d need the cost of living decrease, since I’d probably stay unemployed for a while: Before the econapocalypse, the general rule was that it took one month of job searching for every $10,000 in annual salary earned. Nobody’s crunched a new stat for the new order yet, but Robek says that, anecdotally, what used to take three to six months often now takes six to twelve. He adds, “Or even longer sometimes!”

And um, I was an English major. “Overall, it’s harder to find students employment in their field” in the last couple of years, says Stephanie Ford, director of OSU’s College of Arts and Sciences Career Services. Not as many employers are participating in job fairs; those that do consistently cancel. The 64,000-student OSU graduates many, many people with the same academic qualifications as me every year. Now that so many people from the skilled workforce are getting laid off or downsized, new grads have to compete with them. “It’s a double whammy” for graduating seniors, Ford says. “They’re competing with a more talented applicant pool, and there are fewer jobs to compete for.”

OSU students are therefore being advised to step up their game by doing internships, building rock-solid resumes before graduation, and mastering professional communications so they can email and interview like pros right out of the gate. Ford agrees with Robek that it is “more of a challenge” to find jobs now than when I graduated, no matter how crazy your qualifications. I invite anyone who doubts this to browse the resumes of Mother Jones‘ most recent crop of interns, who between the seven of them speak Russian, Farsi, Dari, Arabic, Italian, French, Spanish, and Hebrew and have worked at places like PBS’ Frontline (two of them), NPR, NBC, New York Press, the Miami Herald, Washington Monthly, The Nation, Sierra, the ACLU, the FTC, and the Special Inspector General for Iraq Reconstruction.

Fairly recently, Robek advised a local alum who was a journalist about my age. He had worked in the field for years, but had lost his job due to cutbacks. He searched and searched for work. Committed to staying a reporter, in the end he moved to DC and took an unpaid internship. “If the field you’re working in has no opportunities, it might be time to find something else you’re passionate about,” Robek said.

“My…’skills’ as a journalist are awfully…specific,” I told him. “It’s hard for me to imagine how they might transfer over to a different and lucrative career.”

He nodded and said, “Yeah.”

Alright, fuck it. After reading my editors’ special report on the “do more, earn less” economy, I announced that I’m moving to France anyway. I should probably get a complementary career for my impending new life. “I want to be a farmer and make cheese,” I told Robek. (A career-compatibility test names skills I do not have—like mechanical competence—as good fits for this. But I’m totally a match for the corresponding values: Tradition. Practicality. Common sense!)

In the case of a career switch, the first thing Robek counseled me to do is gather a lot of information: What do farmers really do? What’s it really like? I’d need to interview some. When I told Robek I’m way ahead of him—I worked on farms for several months in my early 20s—he said I should still get an update on the state of the field, then figure out what to do to break into it. Look on Monster, stalk LinkedIn, try to get in on the ground level. In this employer’s market, where bosses know what they want and can demand exactly that, I have to be able to give it to them. Which in this instance—and in many of Robek’s clients’ instances—will probably involve going back to school, so it’s a good thing I bothered getting a master’s degree. In writing.

By the time I’m done with all that, perhaps the economy will have turned around. Robek is starting to see signs of progress. In the last six months, some of those people who already have careers but are just looking to switch are feeling secure enough to come back to his office. A year ago, he was lucky to have 80 job postings on the Buckeye Job Board. “Right now, there are 200.”

Speaking of Buckeyes, my temporary landlord/roommate Anthony, was one, too, and he has just been informed that he’s lost his job. “Rejected by the Ohio State University!” he said when he opened his laptop after getting home from work tonight. “They just sent me a letter.” He’d applied for a position that he has years of direct experience with, but clearly a lot of other people did, too. He didn’t make it to the interview phase at his alma mater.

Plus: For much more on our “work more, earn less” economy, including the jobless recovery, see our current package on The Great Speedup.