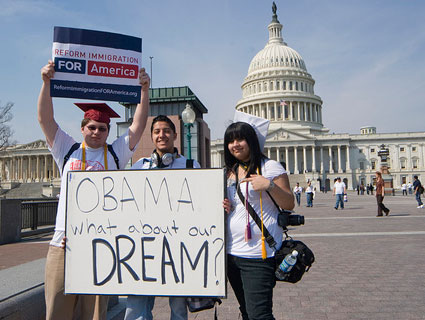 Has President Barack Obama found a way to enact the principles of the DREAM Act—the bill that would prevent the deportation of young undocumented immigrants who are students or military veterans—without passing the measure itself? Unable to move this legislation through the Republican-controlled Congress, the Obama administration has used its executive authority to shape immigration policy in line with the DREAM Act. This month, in a little-noticed move, Obama’s immigration chief advised Immigration and Customs Enforcement officials to use discretion when considering whether to deport certain undocumented immigrants who are particularly vulnerable or have strong community ties to the country. That is, go easy on the sort of undocumented immigrants that the DREAM Act could benefit, among others.

Since taking office, Obama has prioritized the deportation of undocumented immigrants who have committed serious crimes and threaten public safety. Now his administration has moved to ensure that federal immigration agents and attorneys are following such guidelines in the field—while empowering them to take their focus off certain undocumented immigrants who meet a host of criteria. In a June 17 memo to ICE employees, the agency’s director, John Morton, outlined 19 factors that could warrant the use of “prosecutorial discretion” and prevent certain immigrants from being deported, on a case-by-case basis.

According to the memo, there is a range of issues that federal agents, attorneys, and other officials should consider in deciding whether to pursue deportation. They include: whether the person is a military veteran; has made “contributions to the community”; acts as a caretaker of the infirm or disabled; or is very young, very old, pregnant, or nursing.

Morton’s order also instructs federal officials to weigh the circumstances of an undocumented immigrant’s arrival in the US—especially if he or she came as a young child—and whether the individual graduated from high school or college, or is currently pursuing higher education. The memo explicitly states that no group of immigrants is categorically excluded from deportation. So there’s no get-out-of-deportation-free card.

Pro-immigration advocates have cheered the administration for using executive authority to address immigration, while Congress remains at a standstill on the issue. The memo could help “ameliorate some of the harshest consequences of immigration law on a case by case basis,” says Mary Giovagnoli, director for the Immigration Policy Center.

“It’s a paradigm shift…it’s the first memo I’ve seen by an ICE director written in plain English so that a field officer and trial attorney can understand it,” says David Leopold, an immigration attorney and president of the American Immigration Lawyers Association. “What he’s really saying is, look at the people you run across in the scope of your enforcement work as human beings, not merely as statistics and targets—have they developed ties, have they added to the social fabric and culture, do they have children that depend on them? I applaud him for that.”

Republican and Democratic administrations have previously supported the use of prosecutorial discretion in immigration law. Just over ten years ago, Bill Clinton’s Immigration and Naturalization Services commissioner Doris Meissner issued a similar memo instructing agents to factor in an immigrant’s age, health, military service record, and humanitarian concerns. She emphasized the “finite resources” available to the federal government. “Prosecutorial discretion has been exercised by virtually every law enforcement agency in the world… There’s not any special consideration being given to a new group,” says Marshall Fitz, director of immigration policy at the Center for American Progress, who considers the memo more of a “reminder” of the Obama administration’s priorities than a significant policy shift.

But with this memo, the Obama administration has provided much more comprehensive and detailed criteria than the Meissner directive of 2000—singling out immigrants with high school diplomas and those who are pursuing higher education. What’s more, the Obama administration is flipping the burden. Under Meissner’s memo, Leopold explains, “you’ve got to have a really, really good reason” not to pursue an immigrant for deportation. The Obama administration’s memo establishes a different standard: officials should only pursue cases that “meet the agency’s priorities” for immigration enforcement.

Immigration hawks and restrictionists have seized upon the ICE memo as evidence that Obama has granted amnesty to undocumented immigrants and passed the DREAM Act through a backdoor maneuver. “President Barack Obama’s administration is quietly offering a quasi-amnesty for hundreds of thousands of illegal immigrants,” wrote The Daily Caller. The memo was “like a stealth DREAM Act enforcement through non-enforcement,” Kansas Secretary of State Kris Kobach told the website.

Dissent has also surfaced within the ranks of ICE. On Thursday, the National ICE Council, a union representing 7,600 ICE employees issued a new memo, calling it a “law enforcement nightmare” and accusing the Obama administration of going out of its way to “protec[t] foreign nationals illegally in the US.”

“Any American concerned about immigration needs to brace themselves for what’s coming,” Chris Crane, the president of the council, said in a statement. He contended that the memo creates “a means for every person here illegally to avoid arrest or detention, as officers we will never know who we can or cannot arrest.” The National ICE Council further accused the Obama administration of keeping its new policies “secret from us” and forcing ICE agents who questioned the policies to “turn in their badges and file for retirement.”

The memo was meant to “prioritize the agency’s limited resources on targeting criminal aliens and those that put public safety at risk,” ICE spokeswoman Gillian Christensen told Mother Jones. “The directive clearly states that the exercise of discretion is inappropriate in cases involving threats to public safety, national security and other agency priorities.”

In its defense, the Obama administration fired back that the memo was meant to “prioritize the agency’s limited resources on targeting criminal aliens and those that put public safety at risk,” ICE spokeswoman Gillian Christensen told Mother Jones.  “The directive clearly states that the exercise of discretion is inappropriate in cases involving threats to public safety, national security and other agency priorities.”

Members of the National ICE Council—who are typically career employees rather than political appointees—have long been at war with ICE director Morton, having issued a similar no-confidence votes regarding various Morton policies. But the union’s position could make it harder for the Obama administration to put the memo into effect if agents in the field are dragging their heels.

Having pressed the Obama administration to use its executive authority, pro-immigration advocates note they’re heartened by the move. The memo doesn’t eliminate the legal limbo for undocumented immigrants who remain in the country; they still won’t have a pathway to citizenship. But within a dysfunctional immigration system, it could provide a measure of breathing room. “It has become clearer and clearer that [comprehensive immigration reform] isn’t going to happen any time soon,” says Giovagnoli. “This tries to help eliminate unnecessary removal…and gives people more time.”