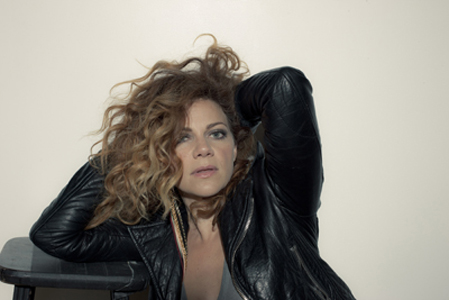 Nikka Costa is a rare breed. With roots in Frank Sinatra’s rat pack—her father, Dan Costa, produced and arranged songs for the famed crooner—Costa traveled the world as a child singer and performed on the White House lawn with Sinatra himself, all before the age of nine. Since then, she has churned out four retro-soul albums with hits like “Everybody’s Got Their Something” and “Stuck to You.” Think of her sound as a reincarnation of Betty Davis, but swap the fro with wild red hair and add some of Janis Joplin’s emotive howl to the mix.

For Costa’s new release, Pro Whoa, the self-proclaimed “funky white bitch” hung up her hang-ups and whipped up a new sound, swapping her previous blues-and-funk signature for beat-heavy dance tracks. (You can download it here.) In a phone chat prior to her San Francisco tour stop, Costa let loose about signing fans’ body parts, finding inspiration in Annie Leonard’s The Story of Stuff, and why you simply must see her perform.

Mother Jones: Let’s talk about the new album. It’s got more of a modern, futuristic feel than your funkier prior releases, what brought on the change?

Nikka Costa: I wanted to do something different than my last album, Pebble to a Pearl. I loved that record, it had a very vintage, old-school feel and we recorded it all in one room. I wasn’t in the funk mode this time around. So I started working around with MPCs [Akai’s music production centers]. I wanted a harder, more beat-driven sound.

MJ: What’s with the EP title? Is that a new catch phrase?

NC: [Laughs.] Hmm, maybe! Well, it’s a little tongue and cheek, something of a playful joke. I do some rapping on the EP, and I’m just talking shit. So one line goes, “cuz I’m a pro. Whoa.” It’s just me poking fun at myself.

MJ: Would you say the EP has a particular theme?

NC: I always come from a female perspective and a strong music base, trying to keep a positive slant on things. It’s important for you to do what you love and not let anyone bring you down, and I keep that message throughout. I write about political issues too. “Nylons in a Rip” is about former President George W. Bush—it’s a comment about being frustrated with the way things were being handled and though it’s not about the same issues today, it’s still got relevance.

I also saw this documentary called The Story of Stuff. It’s amazing and I thought, “My God, I have to write about this!” I didn’t know how to translate the documentary, so I made it about love and losing love. I like writing songs all females can relate to—songs about when you’re a chick and you get your heart broken and you go shopping. [Laughs.]

MJ: Your sense of fun really comes across on your new Nikkasbox YouTube channel. What inspired that?

NC: It’s really new. We’ve only been doing it for a few months. I was trying to figure out how to put my music out because I’ve gone totally independent. We’ve been coming up against some obstacles; we needed to get that machine in motion. I’ve been told, “You’re so funny, and no one gets to see that side of you until they go to your show.” So we decided to start creating videos—we never know what it’s going to be about and we make it up as we go along. But that’s what people are responding to, and we started to use it to promote the new EP. I don’t know where it’s going from here, but it’s really fun.

MJ: You traveled the world with your producer dad and recorded hits as a preteen, but it seems like you’ve really managed to keep a unique personal stamp on things.

NC: If you’re going to be an artist, you have to create music that moves you, and to not try to fit in so much with what’s happening around you. It’s a career choice. I could have done other kinds of songs that got me in the radio or Top 10, but I wouldn’t feel proud of the work. I come up short when I create music I don’t like, and fans can tell too. The goal isn’t to get into it to be famous; the goal is to perfect your craft and create your own sound.

MJ: What can fans expect from you on stage this time around?

NC: The stage and the live show is where I work it all out. It’s always sweaty and loud and you’re definitely not allowed to be a wallflower in my audience. I’m going to make you sing and dance and be part of the band. At the end of the day, if you participate and lose yourself, you’ll leave recharged and satisfied.

MJ: Got any songwriting or touring rituals?

NC: We say a little prayer before we go on stage, getting our heads together. We throw around ideas for the night and how we can bring it to the people. I do some stretching. I don’t have any weird rituals like lighting a candle, or any diva requests.

MJ: How do your fans show their appreciation?

NC: I’ve had people make extensive merchandise. Every time I would go to a new city, they’d deliver some sweat towels with embroidery on it. I’ve signed plenty of tits and asses!

MJ: Thanks. Any last words?

NC: Come to a show! The records are one thing, but the show is where we all have a good time and let it all out. Also, spread the word about good music. Don’t just listen to what’s on the radio. If you put in a little effort, you can find some truly wonderful stuff out there.