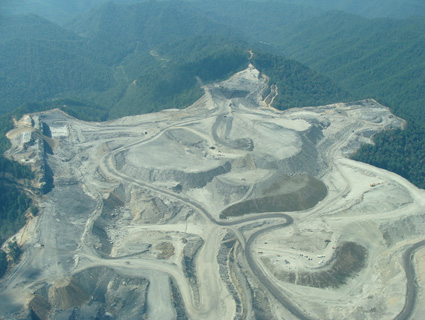 A new study linking Appalachian mountaintop removal mining to birth defects offers compelling new evidence of the practice’s impact on human health. The data could spell bad news for coal companies that have resisted efforts by President Obama’s Environmental Protection Agency and others to curtail the controversial mining method.

In mountaintop removal mining, companies like Massey Energy (now owned by Alpha Natural Resources) blast apart peaks to get to the coal inside without the need for much manpower. Before demolition, the mountains are stripped of their forests. (A 2003 EPA report (PDF) projected a loss of 1.4 million acres of trees if the mining continued unabated.) Then, dynamite-powered explosions produce waste that’s dumped in valley streams and poisons drinking water in nearby communities.

So it’s no surprise that the practice has long been criticized for its environmental impacts. But the new study “offers one of the first indications that health problems are disproportionately concentrated” in mining areas, West Virginia University associate professor and report coauthor Michael Hendryx said in a statement.

Still, many politicians in DC and central Appalachia won’t let mountaintop removal mining die without a fight. In West Virginia, where coal brings billions of dollars to the state’s economy, Democratic acting Gov. Earl Ray Tomblin has defended the industry against environmentalists while lashing out at the EPA. And in Kentucky, whose economy also benefits greatly from coal mining, Democratic Gov. Steve Beshear humored anti-mining activists who staged a sit-in at his office but remains a supporter of mountaintop removal. Both politicians continue to take heat for their stance, most recently during efforts to defend West Virginia’s Blair Mountain. The results of the birth defects study could increase that pressure.