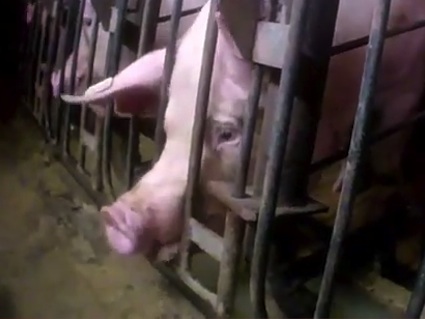 As I tried to tease out in this post, the meat industry’s business model hinges on cutting costs. And relentless cost-cutting pressure translates to relentless pressure to cut corners down the production chain, from the slaughterhouse kill floor to the factory-farm pen. Ted Genoways’ blockbuster piece “The Spam Factory’s Dirty Secret”  delivers a case study in how workers pay the price for the mountains of cheap meat the industry pays out.

Animals pay, too. They are treated as industrial commodities—like identical machine parts being churned out by a factory—not living beings that have evolved over millennia to thrive or suffer under specific conditions. Systematically objectified, factory-farm animals are subject to routine abuse. If you worked as a quality-control inspector on an assembly line, you’d think nothing slamming a defective widget into the waste bin. Widgets feel no pain. As a matter of course, animals get the same treatment, as this—the latest in a string of appalling recent undercover videos—demonstrates.

Now, unlike other recent cases of abuse exposure, this one isn’t likely to result in the responsible company declaring the workers involved “bad apples” and firing them. Most of what you see in the video is entirely routine and industry-standard—like the practice of cutting off the tail of piglets with a pair of shears and no anesthetics. “Tail docking,” as the practice is known, is necessary on factory hog farms, because distressed hogs tend to try to chew each others’ tails off. The same isn’t true of hogs that live outside. Note also the practice of tossing piglets roughly across rooms—which a plant manager is caught onscreen training workers to do, based on the theory that piglets are “bouncy.”

What’s happening here isn’t just a moral abomination. Public health, too, is threatened by abusing animals to the point the point they have open wounds and then hoping daily lashings of antibiotics will keep infections at a manageable level. I can’t imagine a better strategy for incubating antibiotic-resistant pathogens. Mercy for Animals, the group that planted the undercover investigator at the facility, documented these conditions:

Rather than change practices in response to public outrage over these exposures, the meat industry has floated legislation in several states to ban the practice of sneaking cameras onto factory farms. It’s an industry that can’t bear scrutiny.