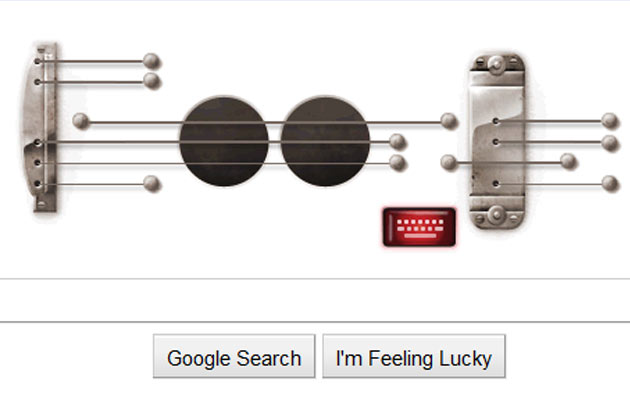 The Twitter/blogosphere has been abuzz—kind of literally—for the past day or so, as hordes of wannabe shredders channel their inner George Harrison on Google’s brilliant (and brilliantly attention-getting) Les Paul birthday doodle.

In honor of the late electric-guitar pioneer and Rock & Roll Hall of Famer Paul—who would just be turning 96, had he not strummed his last chord in 2009—everyone with a couple of hours to kill (apparently everyone with a computer) has been swapping work for micro-recording sessions on the Google home page. Some of their tunes were reminiscent of virtuoso masterpieces; others were more, let’s say, experimental.

The “doodle” widget consists of 10 strings, each an ascending tone in a G Major scale, and grouped into the I, IV, and V chords that lay the foundation of blues and rock and roll. Twitter erupted with transcriptions on the #googledoodle and #lespaul hashtags, a seemingly disproportionate number of them for The Beatles’s “Hey Jude.”

Compared with Paul’s legendary solid-body guitars (played by the likes of Jimmy Page, Pete Townshend, and Billy Gibbons), the doodle was somewhat awkward to play, but nevertheless produced a few excellent renditions of some classics. Here are my top picks, along with a version of Bob Dylan’s “Blowin’ in the Wind” by yours truly. Some shredders opted to upload videos of their masterpieces to YouTube, while others opted to share, via Twitter, the Google-generated links to their recordings. First the videos, and then the links….

The Beatles’ “Here Comes the Sun”

The Temptations’ “My Girl”