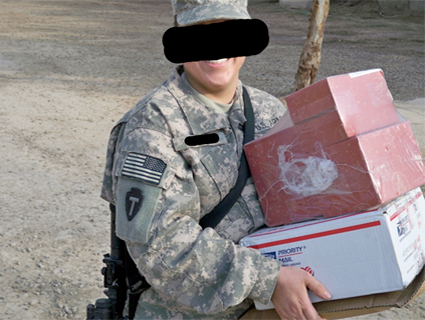 Jessica Wakeman over at The Frisky was kind enough to share this with us:

The world’s number one selling sex toy company, Fleshlight (www.fleshlight.com) [editor’s note: TOTALLY NSFW] has extended their thanks to SEAL Team 6…who conducted one of the bravest missions in American history, forever changing the landscape of the Unites [sic] States of America, and the world.

The company sent the SEAL team a six case of Fleshlight products named “Stealth.” This product is aptly named as it is very concealable and hard to detect…

“We want to thank the Navy SEALs for their efforts,” says Brian Shubin, COO of Fleshlight. “For their courage, and the fact that they risked their lives to protect our freedom, we hope they will appreciate our gifts.”

A Fleshlight, by the way, is pretty much what it sounds like it is. Looks like a flashlight, feels (I was told, by an enthusiastic contractor colleague of mine in Baghdad) like a certain fleshy lady part. If you really want to know what one looks like, here you go. On the company’s website, you can build your own, patterned after specific actresses’ (or your willing loved one’s) fleshy parts, or you can opt for the “alien” toy. Don’t ask.

In any case, the special operators of the armed forces thank you, Brian Shubin, COO of Fleshlight. This totally makes up for losing that $60 million super-stealth helicopter!