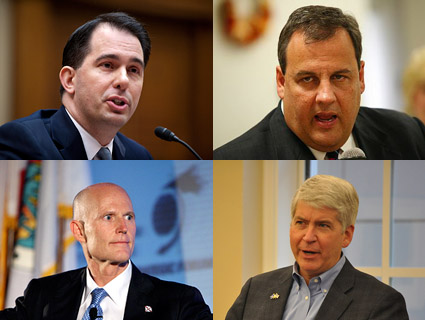 From Wisconsin to Florida, voters are nursing a bad case of buyer’s remorse concerning the rookie Republican governors they elected in 2010.

Surfing into office on the GOP wave in the midterm elections, these first-term governors have rammed through right-wing agendas in their first months in office—attacking unions, slashing jobless benefits, pushing voter ID bills, and rejecting federal funds for popular infrastructure and transportation projects. In near-record time, voters are souring on these conservatives—and in some cases, clamoring for their recall. This blowback could pave the way for a Democratic resurgence in these states in 2012 and boost President Barack Obama’s reelection chances—for, coincidentally or not, several of these free-falling governors reside in crucial battleground states. If their fortunes continue to plummet, these governors could end up being a serious drag on the Republican presidential nomination.

Florida’s Rick Scott and Ohio’s John Kasich are currently the leading contenders for the title of the most unpopular governor in America, according to a recent Public Policy Polling (PPP) survey. (A mere 32 percent of respondents approve of Scott, while just 33 percent support Kasich. A separate Quinnipiac poll puts Scott’s approval even lower, at 29 percent.) Michigan’s Rick Snyder is struggling with a 33 percent approval rating, and in Wisconsin, 43 percent approve of Scott Walker, PPP found—down 3 points from February and 9 from Election Day 2010. Only 41 percent of respondents gave Iowa’s Terry Branstad a thumb’s up. Even New Jersey Gov. Chris Christie, a darling of the GOP, has seen his approval plummet in recent weeks, according to a recent PublicMind released by Fairleigh Dickinson University.

Florida, Michigan, Ohio, Wisconsin—the list reads like a roadmap for a 2012 victory, for either side. “Kasich and his first-term Republican brethren across the Midwest may be the best thing that’s ever happened to Barack Obama’s reelection chances,” writes PPP pollster Tom Jensen.

The decline of these GOP governors famously began in the Badger State. In February, Walker sparked a national controversy by threatening to use the National Guard against citizens protesting his plan to strip public-employee unions of most of their collective bargaining rights. In response, more than 100,000 demonstrators filled the streets of Madison, the state capital. Walker became the face of the GOP’s anti-union assault around the country. But prior to his assault on unions, Walker had started alienating voters by rejecting $810 million in federal money to build a high-speed rail line in the state. This past Thursday, he signed into law an unpopular voter ID bill, which critics say is unnecessary and will only disenfranchise college students and elderly citizens.

Not only has Walker’s approval rating sunk, but PPP found that 50 percent of Wisconsinites would vote to recall Walker. In a hypothetical election, Walker would lose to either ex-Sen. Russ Feingold, a Democrat who lost his seat last November, or Milwaukee Mayor Tom Barrett, Walker’s Democratic opponent in 2010. Since Walker can’t be recalled till next year, Democrats have triggered recall elections for six GOP senators who backed his anti-union bill. Those elections will take place this summer. (Three Senate Democrats also face recall elections.)

Scott and Kasich have embraced a similar agenda. Scott turned down federal high-speed rail money, a move panned by Democrats and Republicans in Florida, and he signed a GOP-backed voter ID bill that critics say suppresses Democratic voters and wastes state money. In April, Kasich signed his own anti-union bill that went further than Walker’s by limiting the bargaining power of not only teachers and janitors but cops and firefighters. (Scott has said he supports cutting bargaining rights but hasn’t introduced any such legislation.) In hypothetical do-overs of their 2010 gubernatorial elections, Kasich would lose by a whopping 25 points and Scott would lose by 19, according to PPP polling data.

Then there’s Michigan’s Snyder. His controversial “financial martial law,” signed into law in March, gives unelected, state-appointed bureaucrats the power to wipe out union contracts and even entire local governments in the name of fixing financially troubled cities and municipalities. Snyder beat Democrat Virg Bernero in last fall’s election by 18 points; an April PPP survey put Bernero ahead of Snyder in a hypothetical rematch by 2 points. Meanwhile, a group called Michigan Citizens United is laying the groundwork for a recall of Snyder.

PPP’s Tom Jensen notes that widespread rejection of Walker and Co. could make it easier for Obama to win these key states in 2012, as he did in 2008. “You have a situation where people voted Republican last year and are quite unhappy with the results, and that might keep them from voting Republican again next year whether they’re enthralled with Obama or not,” Jensen says.

In Wisconsin, though, Walker’s decline might not automatically generate votes for Obama or other Democrats. Charles Franklin, a University of Wisconsin-Madison political science professor, says that though his state’s union fight has mobilized Democrats and tarnished Walker’s image, it has also fired up GOPers. To wit: The recent state Supreme Court election, largely seen as a proxy fight between pro-Walker incumbent David Prosser and liberal JoAnne Kloppenburg. With more than 1 million votes cast, Prosser won by 7,000 after several recounts. Franklin notes that Obama might not get a bump from Walker’s slump if GOPers mobilize in 2012 as they did this spring. “Even if Walker stays in the low- to mid-40s, if there’s a highly mobilized Republican electorate,” he says, “it could still mean a very hard-fought battle for the majority of the state.”

In Florida, Rick Scott’s “toxic” reputation could boost the president, says Daniel Smith, a University of Florida political science professor. Smith says Scott’s “draconian” policies might turn off Republicans and, more importantly, independent voters. If Scott remains as unpopular in November 2012 as he is now, Smith says that could nudge GOP-weary independent voters in Obama’s direction. “It’s the independents and Republicans,” he says, “who supported Scott in the midterm and who might be turned off now.”

Of course, governors influence presidential elections in ways that have nothing to do with their approval numbers. They control the state party apparatuses and can mobilize grassroots activists as well as drum up cash from top donors. Yet a governor under siege—or one at odds with his own party, like Florida’s Scott—is of little help to a national candidate. “If Rick Scott’s numbers stay as they are now, the governor is not going to be terribly helpful to the Republican nominee,” Smith says, “and that will help Obama.”