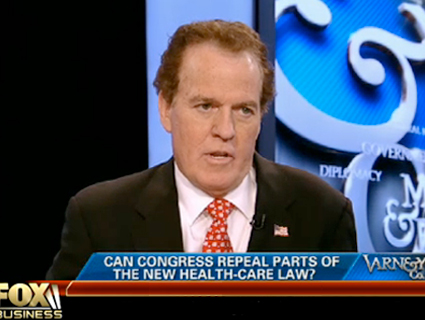 After first placing Paul Ryan’s drastic Medicaid-slashing proposal on the negotiating table, Republicans are lining up behind a yet another plan to curb the program’s benefits and payments—a smaller-scale change that’s likelier to pass Congress. Republicans in both houses introduced bills on Tuesday that would eliminate federal regulations that prevent states from trimming their Medicaid rolls or erecting new barriers to enrollment.

In February, Mother Jones broke the news that Republicans planned to target these so-called Maintenance of Effort (MOE) requirements, which the federal government put in place after giving states a new injection of Medicaid money in 2009. Now they’ve made good on their promise. The State Flexibility Act—sponsored by Sen. Orrin Hatch (R-Utah) in the Senate and Reps. Phil Gingrey (R-Ga.) and Cathy McMorris Rodgers (D-Wash.) in the House—would give states significantly more leeway in kicking beneficiaries to the curb, reducing payment to nursing homes, and making other reductions to shrink budget gaps.

“Take the handcuffs off the governors,” Gingrey (R-Ga.) said at the bill’s unveiling on Tuesday, arguing that current law prevents the states from “ferreting out waste, fraud, and abuse, finding out if someone’s falsified information on income…maybe even if they’re illegal immigrants.” The Congressional Budget Office has estimated that the bill would save $2.8 billion over five years.

The State Flexibility Act would not go as far as the Ryan plan, which proposes a massive overhaul of the Medicaid funding structure. But it would allow states to take a knife, if not a hatchet, to the program. Gingrey said that only 300,000 beneficiaries would be eliminated from the program under the bill, but he and his colleagues admitted that they didn’t have an independent CBO estimate to confirm the number.

Back in 2001, before the federal government made Medicaid money contingent on the MOE rules, states took 1.2 to 1.6 million people off Medicaid. Having already made steep cuts to provider payments and benefits, “some states will certainly make eligibility cuts,” says Edwin Park, VP for health policy at the Center for Budget and Policy Priorities.

Moreover, by introducing new procedural hurdles—Mississippi, for instance, has made it harder for people to renew coverage—states could deter more-vulnerable residents from signing up, says Park. Similar proposals put forward in California would have reduced enrollment by 500,000, he adds.

That said, the act has a better chance of making it through Congress than Ryan’s controversial budget, at least, which passed the GOP-controlled House on a strict party-line vote. “Eliminating the MOE provision is so much easier to get done, it’s easy to understand—you have such strong bipartisan support on this one,” Gingrey told me. “You don’t quite have that bipartisan level of support” with Ryan’s plan to administer Medicaid as block grants to the states.

While Gingrey wouldn’t “name names” of any Democrats on board, a handful of Democratic governors facing budget crises might support such legislation. In Washington, for instance, Rep. McMorris Rodgers has heard encouraging words from Democratic Gov. Christine Gregoire, who’s pushed for more state more control over Medicaid.

By pushing the Ryan plan so aggressively, the GOP has managed to move back the goalposts of the Medicaid debate: This plan, by comparison, appears significantly more moderate. What’s more, Republicans seem to be anticipating the common criticism that their cutbacks victimize the most vulnerable. At the Tuesday press conference, Hatch pointed out that ballooning Medicaid costs might force states to further cut things like education and law enforcement. His colleagues similarly claimed that paring back Medicaid would free up money for public university tuition, transportation, and environmental protection.

In fact, the Republicans have pushed for major cuts to all of those programs, so it may be tough to convince the public that they’re eager to spend elsewhere. And all the talk about giving states “flexibility” is, of course, a euphemism for snipping away at the social safety net.