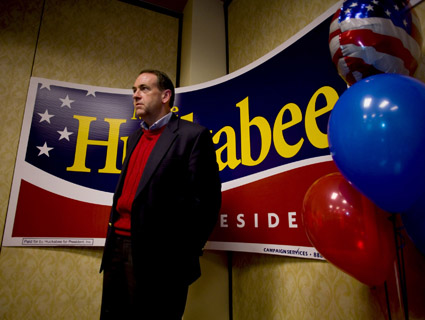 On Friday, former Arkansas governor Mike Huckabee hinted that he may be about to declare his presidential intentions, saying on his radio show that he’d be making a “very important announcement” over the weekend on his Fox show. The tease follows months of speculation over whether the best-selling author and social conservative rock star would enter the 2012 race, with Huckabee and his allies saying he could wait until this summer to make up his mind.

But already his wavering has come at a cost. Huckabee’s Iowa campaign dream team, which helped engineer his stunning upset victory in the state’s 2008 caucus, has all but scattered, in some cases joining the campaigns of his would-be rivals: Eric Woolson, Huckabee’s ’08 Iowa campaign manager, has gone to work for Tim Pawlenty. Wes Enos, Huckabee’s political director, was hired by Minnesota Rep. Michele Bachmann’s political action committee. Danny Carroll, Huckabee’s former Iowa co-chairman, has come out in support of long-shot candidate Roy Moore, the former chief justice of Alabama’s state Supreme Court. And that’s just a few of the members of Huckabee’s Iowa operation who have moved on.

This raises the question: If Huckabee is in fact entering the race, will there be any talent left to replace his 2008 team and build the grassroots coalition needed to win Iowa’s make-or-break caucuses?

Influential Iowa Republicans have their doubts. Matt Strawn, the chairman of Iowa’s GOP, has said the state party has had no contact with Huckabee. In a recent appearance on C-SPAN, Strawn questioned Huckabee’s ability to be competitive given how long he’s waited to enter the race. “It may be tough to reassemble that coalition he had at least from a leadership perspective, because as everybody knows here in Iowa that it is a very retail heavy process with about 1,800 precincts where you need somebody organizing in those precincts,” Strawn said. (Huckabee’s political action committee, HuckPAC, did not respond to a request for comment.)

Steffen Schmidt, an expert on Iowa’s caucuses and a political science professor at Iowa State University, agrees. “I don’t think he can wait very long, honestly; I think he has to make a decision soon,” Schmidt told Reuters.

Bob Vander Plaats, Huckabee’s ’08 Iowa campaign chairman, recently said that the former governor is “looking for ways to get in and not looking for ways to get out.”A political kingmaker among Iowa’s social conservative set, Vander Plaats won’t be working for Huckabee or any of the other GOP contenders in Iowa this time around. He now runs the influential Christian conservative group Family Leader, and he says his organization won’t endorse a candidate until later this fall. But he says that Huckabee’s drawn out decision-making process could put himself at a disadvantage in a GOP field filled with social conservatives. “The danger in [Huckabee] waiting is that a Rick Santorum or a Tim Pawlenty or Newt Gingrich or a Herman Cain catches fire with the grassroots and they take up the void that Huckabee would fill,” he says.

Not that there won’t be campaign staffers available for hire if and when Huckabee decides to run. The issue is whether he can find the kind of talent he had in 2008, says Tim Hagle, a political science professor at the University of Iowa. It won’t be long before the staffers who can transform candidates into Iowa caucus contenders are all snapped up. “I have students who need jobs,” he says. “But the idea here is getting people who have experience and have been through the process before, that know what they’re doing.”

Of course, Huckabee’s a different type of candidate this time around. In 2007, Huckabee was “an asterisk in the polls,” Vander Plaats says; now he’s a celebrity among social conservatives. That stardom could make up for a less impressive ground operation in Iowa. “Huckabee’s starting out with an immense advantage—people see him, they know him,” he says.

But if history is any indication, star power doesn’t always translate into support in the Iowa caucuses, notes the University of Iowa’s Hagle. In 1980, for instance, Ronald Reagan entered the Iowa caucuses as a superstar within the GOP establishment, neglecting to launch the aggressive campaign that fellow Republican George H.W. Bush did. The result: Bush won. “Reagan didn’t do that grassroots, come-out-and-meet-the-folks kind of campaign,” Hagle says. “So even somebody like Huckabee, who’s done this before, can’t expect to win. The people here don’t want to be taken advantage of.”