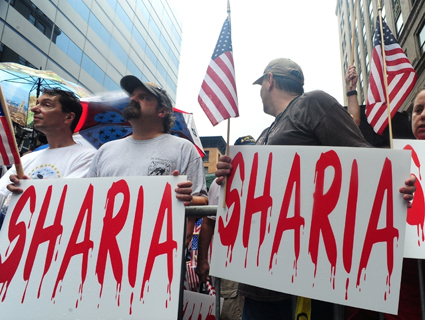 In late January 2001, the day after George W. Bush was sworn into office, a group of conservative politicos including recently retired House Speaker Newt Gingrich gathered at Grover Norquist’s Washington, DC, office for a meeting with influential faith leaders.

That, in itself, was hardly newsworthy. Bush had swept into office on the backs of values voters. But the gathering wasn’t catering to evangelical Christians; the purpose was to discuss a variety of issues of concern to American Muslims—everything from political appointments, to civil liberties, to a Ramadan postage stamp. It was organized by the Islamic Institute, a think tank founded by Norquist, the conservative anti-tax crusader, and the guest list was culled from the ranks of Muslim–American organizations and community leaders. By some estimates, Muslims had turned out in huge numbers for Bush; at least one prominent Republican credited them with making the difference in Florida.

But those days are over, and if the rhetoric from the current crop of candidates is any indication, there’s little hope for a rebound in 2012. Since 9/11, Republicans have turned a once-promising—and rapidly growing—voting demographic into a punching bag. Lately, Republican lawmakers across the country have further antagonized their Muslim constituents by pushing quixotic legislation to ban Islamic sharia law from being used in state courts. Even the founder of the group Muslims for Bush, Colorado GOPer Muhammad Ali Hasan, left the party, citing frustration with its newfound anti-Muslim “bigotry.”

Now, as Republicans head full-steam into the nominating process, they face a choice: Tone down the rhetoric, or risk permanently alienating a community that’s expected to double in size over the next two decades.

“[Republican candidates] have not reached out to me, and I’m not aware of any efforts that they have made to reach out to other community leaders,” says Nihad Awad, executive director of the Council on American Islamic Relations (CAIR), who attended Norquist’s meeting. “From 2000 until now, there’s been a huge difference in terms of what kind of relationship we have with them. Their ability and desire to reach out to the Muslim community is almost like night and day.”

The 2000 election was the high-water mark in the campaign by Muslim leaders to position the community as the swing vote of the future. More affluent than the American average, big on civil liberties and social justice, and historically independent (they’d gone for George H.W. Bush in 1992 and then for Bill Clinton in 1996), Muslims represented a natural target for both parties. Or so the thinking went. But Muslims’ political clout had been hampered by years of poor turnout. As Sen. Dianne Feinstein (D-Calif.) put it in 1994, referring to Muslims, “I don’t have time to meet with people who don’t vote.”

The bottom fell out for the GOP in 2008 when, according to the American Muslim Taskforce on Civil Rights and Elections, just
2.2 percent of Muslims voted for Sen. John McCain.

Leaders of four of the largest Muslim–American organizations decided to try something new: The plan was to emulate the model employed by Jewish–Americans, who held a similarly small share of the population but wielded outsize political power through groups like the American Israel Public Affairs Committee (AIPAC).

So they formed a bloc. There are just 3 million Muslims in the United States, but they’re clumped disproportionately in battleground states like Michigan, Florida, and Ohio. Pool those votes, and you could have the kind of powerful lobby politicians would have no choice but to listen to. CAIR, along with the Muslim Public Affairs Council (MPAC), the American Muslim Council, and the American Muslim Alliance, joined forces to form the American Muslim Political Coordination Council PAC.

The new political action committee spurred voter registration drives and candidate forums, and served as a portal for fundraising efforts; it ultimately endorsed Bush, after securing key promises on the use of secret evidence in deportation cases and racial profiling. After the election, CAIR trumpeted the role of Muslim–Americans in the Republican victory. According to an informal survey of the group’s membership, 72 percent of Florida Muslims had cast their votes for Bush. From all appearances, the bloc experiment was a win-win.

The September 11 attacks changed things, but only gradually. The Bush administration tacked hard against the kinds of civil liberties they’d campaigned on while nonetheless taking steps not to vilify the Islamic faith. But there was a shift within the party.

“There were people that took advantage of the lack of communication that was taking place—people who had a specific agenda, and specifically, people who were involved in the Islamophobic industry,” says Haris Tarin, MPAC’s DC director, referring to network of think tanks and commentators that are benefiting from the sharia freakout.

Rising conservative politicos like Suhail Khan, a Bush White House liaison to the Muslim community and later an official at the Department of Transportation, increasingly found themselves in the crossfire. Khan, for his part, was accused of supporting the Muslim Brotherhood (which he has denied). Meanwhile, Mohamed Elibiary, a young Republican activist in Texas, was attacked by right-wing sites like Jihad Watch and others for attending an event at a mosque in Irving that honored the Ayatollah Khomenei, the late leader of Iran’s Islamic Revolution. Some of those concerns were more serious—Sami Al-Arian, a former University of South Florida professor who’d played a key role in Bush’s 2000 outreach efforts, was convicted of material support for terrorism and sentenced to 57 months in federal prison.

The rift between the Republican Party and Muslims was reflected at the polls. The bottom fell out for the GOP in 2008 when, according to the American Muslim Taskforce on Civil Rights and Elections, just 2.2 percent of Muslims voted for Sen. John McCain. (Gallup placed that number at 11 percent, but no one has come up with a higher figure than that.)

In contrast to Bush, who visited a mosque during his campaign and called Islam a “religion of peace” after 9/11, the current crop of GOP presidential candidates have used Islam mostly as a bludgeon.

Herman Cain, the Georgia businessman whom focus groups declared the victor of the first debate in South Carolina, made headlines in March when he vowed not to appoint any Muslims to his administration; former Pennsylvania Sen. Rick Santorum told Politico in May that “creeping sharia is a huge issue“—a comment echoed by Rep. Michele Bachmann (R-Minn.). Even former Minnesota Gov. Tim Pawlenty, considered to be one of the more moderate GOP contenders, has furiously disavowed efforts by his administration in St. Paul to promote sharia-compliant mortgages for Muslims. (Islam forbids the collection of interest.)

And then there’s Gingrich. Attentive and supportive at Norquist’s gathering according to Awad, he now calls for a ban on sharia law in the United States and warns that the nation is careening toward a takeover by radical Islamists.

“Gingrich knows better,” CAIR’s Awad said. “He knows the Muslim community. He met with them. And I think this is a cheap shift, just for political gain. He’s a well-read individual. But I think he’s not taking the leadership position. He’s exploiting the ignorance.”

Still, there may be hope. Elibiary, who founded the Freedom and Justice Foundation to promote “centrist public policy” on behalf of Muslim Texans, cites Govs. Chris Christie of New Jersey and Mitch Daniels of Indiana as candidates who could transcend the party’s recent rhetoric.

Christie, who has insisted he won’t run for president in 2012, broke with conservatives last summer to publicly support the Park 51 community center in Lower Manhattan (known by critics as the Ground Zero Mosque), and ignored criticism from the anti-sharia crowd for appointing a Muslim to the Passaic County Superior Court. Daniels, whose grandparents came to the United States from Syria, was recently honored by the Arab American Institute, which referred to him, in contrast to his fellow Republicans, as “the adult in the room.” (Daniels has also ruled out a run in 2012.)

Elibiary believes that the party will come around to Muslims again, but it may take some time. “Republicans, I think, will fix a lot of those things come the 2016 election,” he says. “A lot of those guys that are bottom feeders, like the Newt Gingrich type of people, thankfully are going to be a lot less relevant come 2016.”

And in that sense, there seems to be some agreement: Beating up on Islam is good for television ratings, but there’s little evidence it’s a successful electoral strategy. Sharron Angle, who once warned that the city of Dearborn, Michigan, was already under the yoke of sharia law, fell flat in her Nevada Senate race. Lou Ann Zelenik, a Tennessee congressional candidate who made opposition to a proposed Islamic community center in Murfreesboro her central campaign issue, lost big to a conservative candidate who supported the mosque. And Rick Lazio, the former New York congressman whose campaign sought to exploit the Park 51 project, never made it out of his gubernatorial primary.

But even as Muslim leaders attempt to restore the community’s political clout, it’s unlikely we’ll see anything like 2000 anytime soon. MPAC’s Haris Tarin was not involved in those efforts, but he believes the idea of a “Muslim vote,” championed by his organization a decade ago, is unrealistic given the immense diversity of the American Muslim community. “It could be done potentially at the local level—places like Northern Virginia, or parts of Michigan,” he says. “But at the national level, having a bloc vote is impossible.”

There’s also a debate as to whether there was any such thing as a “Muslim vote” to begin with. James Zogby, a Democratic consultant and founder of the Arab American Institute, says that reports of a Muslim landslide in 2000 were based on wishful thinking. “The numbers weren’t there,” he says. “That day in my office after the election, I had like three different ethnic groups all claiming credit for winning. Anyone who had more than 500 voters in Florida was taking credit.”

By Zogby’s count, Bush garnered just 46 percent of the Muslim vote in Florida, a far cry from CAIR’s 72 percent tally. But that’s still significantly higher than anything the party’s achieved since—and in a state like Florida, every vote counts.

Ultimately, Elibiary says, the Republican Party doesn’t have a Muslim problem—for the most part, grassroots activists don’t care about his faith—it has an image problem.

But Fox News isn’t going away any time soon. And over the last few years, through harsh immigration laws, an embrace of “otherism,” and rhetorical jabs at Islam, GOPers have consolidated their grip on white voters at the expense of virtually everyone else—even as that demographic reflects a smaller and smaller share of the electorate as a whole. It’s too early to say whether or not Muslim voters will make a difference in Florida come 2012; President Obama has, after all, failed to deliver on many of his big promises on civil liberties. Going forward, though, Republicans’ falling out with a once treasured constituency is emblematic of the question facing the party as a whole: How far can it go to win present elections without destroying its chances of prevailing in future ones?