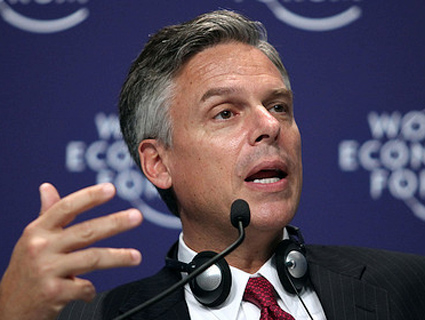 Former Utah governor Jon Huntsman, who recently resigned his post as Barack Obama’s ambassador to China, appears poised to pursue the Republican presidential nomination. Huntsman, who just got back to the states last week, officially registered his political action committee—H PAC—with the FEC on Tuesday. That move will allow him to travel the country in support of fellow Republicans and raise money that he can use in a presidential run. Huntsman’s major problem is, of course, that he voluntarily and graciously accepted an appointment to serve in a Democratic administration. That might not play well with Republican primary voters. But if you think Huntsman’s chances of clawing to the top of the GOP ticket next year are totally DOA, The Hill wants you to think again:

“I consider it a compliment for anybody to be selected to be ambassador to China,” Wilson said. “So I think that enhances his credentials — he was sent to represent the people of the United States.”

If a hardliner like Joe “You Lie” Wilson is giving Huntsman a serious look, that’s a sign the former Utah governor could find more friendly faces on Capitol Hill over the next few weeks. Wilson is attending this weekend’s graduation ceremonies at the University of South Carolina, where Huntsman will deliver the commencement address. He’ll also meet with two of the GOP’s rising stars, Rep. Tim Scott (R-S.C.) and Gov. Nikki Haley (R), on his swing through South Carolina.

Keep an eye on the Palmetto state this weekend. In the wake of last night’s lukewarm GOP B-team debate in Greenville—where this little nugget could end up being the biggest news—now could be an ideal time for Huntsman to announce his arrival. The reality is that he has near-zero name recognition nationally, and his South Carolina visit offers him a big opportunity to drum up support in a key GOP battleground. Plaudits from rising party stars like Haley and Scott could give him the early shot in the arm he’ll need to stand a chance against heavy hitters like Mitt Romney.