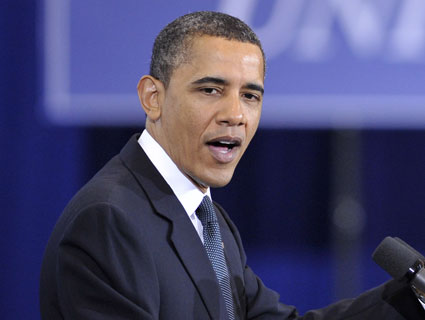 Barack Obama wants to be the grown-up.

That’s part of the reason why the White House released his original long-form birth certificate and arranged for Obama to make a televised statement on the matter.

After years of intermittently swatting at the birthers and dismissing their conspiracy-theory-mongering, the White House took a step to shut down the nonsense once and for all. In a surprise move on Wednesday—there were no hints beforehand—the White House handed out copies of the long-form birth certificate to reporters at an early morning briefing and posted it on the White House blog. The document clearly demonstrates that the president was born in Hawaii on August 4, 1961 (as did the certificate of live birth released by Obama’s presidential campaign in 2008).

Why did Obama finally play the ultimate card? In his statement, Obama did not refer to celebrity developer Donald Trump, who in recent weeks has made birtherism a core component of his presidential campaign flirtation. But the president did refer to “sideshows and carnival barkers.” And records released by the White House show that it was not until last week that a lawyer for the president sent an official request to the Hawaii Department of Health requesting that the department make an exception and release to the White House a copy of the long-form certificate registering Obama’s birth. (Standard practices is for Hawaii to issue a computer-generated certificate of live birth—which is considered an official birth record in the state.)

Obama’s request came after Trump had elevated birtherism—and as Republicans in various state legislatures were pushing birther bills. (Arizona’s Republican governor, Jan Brewer, vetoed a birther bill on April 18.) But Obama offered a different reason for his decision to smother the birthers:

Normally I would not comment on something like this, because obviously there’s a lot of stuff swirling in the press on at any given day and I’ve got other things to do. But two weeks ago, when the Republican House had put forward a budget that will have huge consequences potentially to the country, and when I gave a speech about my budget and how I felt that we needed to invest in education and infrastructure and making sure that we had a strong safety net for our seniors even as we were closing the deficit, during that entire week the dominant news story wasn’t about these huge, monumental choices that we’re going to have to make as a nation. It was about my birth certificate. And that was true on most of the news outlets that were represented here.

Obama was sending a message to the media: c’mon guys. On the way into the press briefing, he chided NBC News’ Chuck Todd, who moments earlier had been doing a live-shot on NBC’s Today show: “I was just back there listening to Chuck—he was saying, it’s amazing that he’s not going to be talking about national security. I would not have the networks breaking in if I was talking about that, Chuck, and you know it.”

Obama has long believed that the national political discourse is too often dominated by trivial matters. In his inaugural address, he quoted the Bible: “the time has come to set aside childish things.” And in the wake of the tea-partied Republican victory in last November’s congressional elections, Obama has tried to establish himself as the responsible negotiator in Washington, realizing that is one way to win back independent voters who have lost their affection for the president. Ending the birther conspiracy allowed him to nudge the political media and demonstrate he’s the mature leader in town.

Obama felt strongly about delivering this message himself, White House aides say. He wanted to come to the podium and take point on the birther rebuttal, using the occasion to address that larger problem and to demonstrate his own desire to rise above political pettiness in order to make Washington work for the citizenry. So rather than just release the records and allow the cable chatterers to chew up the material (and bash Trump), the White House deployed the president to throw the knock-out punch, realizing that it had a much better chance to cut through the clutter if he was the messenger.

In the minutes before Obama’s appearance in the press briefing room, White House reporters observed that this moment seemed absurd. “This is like a movie,” Todd said. The most powerful fellow in the world was going to answer the most ridiculous question in recent political history—and the media was jumping up and down in anticipation. (Obama’s case proven.) But as is their way, Obama and his aides were looking to use this episode to their advantage and make (if not score) larger points. But can he turn the end of birtherism into a teachable moment? That may well depend on how the media covers it.