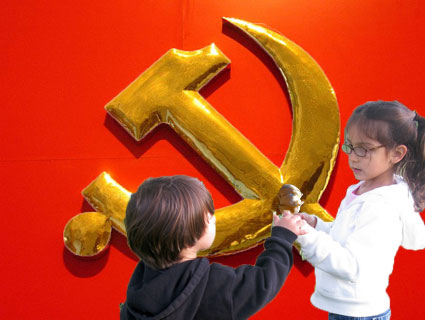 Tim Pawlenty’s tenure as governor of Minnesota was largely devoid of the kind of polarizing episodes that give campaign managers migraines. If anything, the knock on the GOP presidential contender seems to be that, with a few exceptions, he’s a little too ordinary. One of those exceptions came in 2003, when the newly elected Republican governor selected Cheri Yecke, a little-known Bush administration veteran, to produce new educational standards for what students should—and shouldn’t—learn.

The battle that followed put Pawlenty at the center of a culture war conflagration. Members of Yecke’s handpicked standards committees dismissed sharing and cooperation as “socialist” ideas, suggested replacing “We Shall Overcome” with “Dixie” in a unit on protest songs, and advocated downplaying the impact of slavery on the nation’s antebellum economy—lest it sour students on the virtues of the free market.

The resulting outcry was a major factor in Yecke’s removal from office by the Democratic-controlled state Senate, and handed Pawlenty one of his biggest political defeats.

As Pawlenty’s education commissioner, Yecke’s main job was to produce new standards in core subject areas, which could be used to track student performance under the just-passed No Child Left Behind Act. “We need to regain the edge that we have lost as an education innovator,” Pawlenty explained at the time. “Dr. Yecke is precisely the right person to lead that change.”

In the meetings, conservatives successfully argued that sharing was an inappropriate concept for kindergartners because of its creeping “socialist” implications.

Pawlenty’s pick got off to a rocky start. For one thing, No Child Left Behind faced significant opposition among teachers’ unions, which viewed Yecke’s proposals as an affront. Yecke, who came to Minnesota from the federal Department of Education, was viewed by opponents as too close to the Bush administration. But the opposition ramped up when Yecke convened a committee to study US and world history standards.

Sara Evans and Lisa Norling, both history professors at the University of Minnesota, were dismayed by the process from the beginning. They began attending committee meetings, which were open to the public, and taking notes on the proceedings. What they heard stunned them.

Yecke formed a committee of educators, parents, politicians, and businessmen, and set them to work drafting the standards. But as Evans and Norling later explained in an article (PDF) they wrote for the Organization of American Historians’ newsletter, the meetings seemed overrun by conservative activists, some of whom did not reveal their affiliations. One member, identified simply as a parent and former teacher, was on the board of directors of the conservative Claremont Institute, a right-wing think tank that’s been described—by a supporter—as a “training ground for a lifetime campaign in the trenches of political warfare.” (Christine O’Donnell and Andrew Breitbart are both alums.) Private religious academies and homeschoolers were well-represented, even though the standards would have no impact on their curricula.

The resulting circus put Minnesota on the front lines of the culture wars. In the meetings, conservatives successfully argued that sharing was an inappropriate concept for kindergartners because of its creeping “socialist” implications. “In response to another critique noting the absence of organized labor from both the US History and the Economics standards,” Evans and Norling noted, “a different committee member sputtered, ‘unions! Don’t even go there!'”

Yecke, who did not attend the committee meetings, says she would not have tolerated such remarks if she had been aware of them at the time, and emphasizes that those discussions were a vital part of the process. “These committees had a serious purpose, and they were no place for flippant and inappropriate comments,” she said in an email to Mother Jones.

The initial draft standards promoted ideological positions—such as the notion that post-Cold War conflicts were defined by a “clash of civilizations”—as fact, and focused almost exclusively on European history (Latin America and Sub-Saharan Africa combined for just 8 of the more than 170 world history “benchmarks”). The women’s rights movement was pushed to the sidelines; Ronald Reagan was credited with almost singlehandedly winning the Cold War.

“I strongly disagree with President Obama’s remarks when he proclaimed that America was no longer a Christian nation,” Yecke says.

There was also an evident emphasis on the centrality of faith to the American story: Students were supposed to be taught, for instance, that the four references to the Creator in the Declaration of Independence inspired the separation of powers doctrine in the Constitution. In an interpretation common among Christian conservatives, the four references establish God as a legislator, judge, executive, and founder, while asserting that only in His hands can those powers be unified. In other words, separation of powers isn’t just a constitutional requirement; it’s a Biblical one, too.

Ultimately, Evans and Norling, along with 30 other University of Minnesota history professors, signed a letter to Yecke, outlining a list of “inaccurate” and “misleading” assertions in the proposed standards. The curriculum, they argued, represented a “comprehensive rejection of several generations of historical scholarship.” Two separate petition drives, led by active and former public school social studies teachers, collected thousands of signatures protesting the commissioner’s actions. Dissenting members of the committee released their own report, calling on Yecke to start over.

“There was a real emphasis on the role of faith as a motivator for the actions of historical figures,” remembers Democratic State Rep. Jim Davnie, himself a former social studies teacher. “Certainly faith as a motivation is part of the America story, but it was disproportionately large and it squeezed out a lot of other references to social movements.”

Many of the most controversial benchmarks were phased out in two successive drafts over the next few months, and the finished standards won praise from the likes of New York University professor Diane Ravitch (PDF), an influential advocate for education reform (Ravitch had called Minnesota’s old social studies standards “among the worst in the nation“). But the damage had been done. The state Senate commissioned its own set of standards to counter those initiated by Yecke and approved by the GOP-controlled House, and a compromise agreement was ultimately reached. Yecke didn’t do herself any favors on the public relations front, accusing her critics at the University of Minnesota of promoting “the hate-America agenda.”

When it came time for the Senate to hold hearings on Yecke’s formal confirmation, which had been put off for a year, she was rejected on a party-line vote.

Years later Yecke isn’t backing down from her views. “I strongly disagree with President Obama’s remarks when he proclaimed that America was no longer a Christian nation,” Yecke said in an email. (Obama actually said “we are no longer a Christian nation—at least not just,” alluding to the country’s range of religious traditions.) “From the writings of our Founding Fathers, to cases settled by the Supreme Court, the evidence shows that [the] opposite is true. Our nation was founded on Christian principles, and primary source documents make this very clear.”

After a brief run for Congress and a stint as K-12 chancellor under Florida Gov. Jeb Bush, Yecke now teaches and serves as dean of graduate programs for Harding University, a conservative Christian school outside Little Rock, Arkansas. She says the attacks on her record were motivated by politics, not substance. “Strong conservative women seem to anger them,” she explains, referring to her opponents and drawing a parallel to another Pawlenty appointee, Carol Molnau, who was ousted as transportation commissioner in aftermath of the I-35W bridge collapse.

“I am very proud of the work we accomplished,” she says, touting efforts to bring Minnesota into compliance with No Child Left Behind. “I might have been a casualty in the battle over the standards, but Governor Pawlenty won the war and his policies live on.”

If elected president, Pawlenty would have the challenge of shaping the nation’s education policy—and thanks to No Child Left Behind and President Obama’s own efforts, he’d oversee a Department of Education with a greatly expanded role in public schools. His record in St. Paul, and his appointment of Yecke in particular, raise questions about what direction he’d take the department. His campaign did not respond to a request for comment.