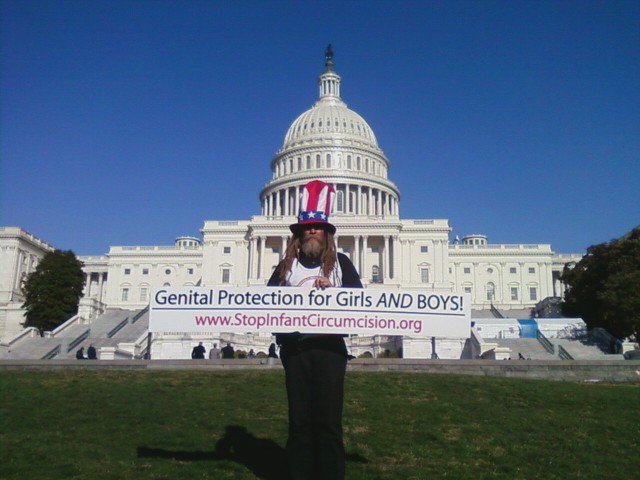 On Thursday, the Tea Party Patriots held a “continuing revolution” rally on Capitol Hill. Originally, the rally was advertised to take place on the east side of the Capitol, which isn’t the most desirable spot for a protest. Later, the activists ended up even farther down the Hill in a wooded spot near the Robert Taft memorial and away from most gawking tourists. At least one tea partier suspects that the location problem stemmed from the fact that the most desirable spot on the Hill—the west lawn, where tea partiers have held most of their big protests—has been occupied most of the week by a group of anti-circumcision activists. Those particular activists have been protesting on the Hill annually at this time for 16 years.

David Wilson, who runs Stop Infant Circumcision, says he applied for a permit before the tea partiers did, and as such, he was naturally entitled to the space. “I feel as though my purpose and cause is greater than their is,” he told me. Wilson notes that at least 120 boys die every year from circumcision and “you don’t hear a big outcry over this.” That said, Wilson, who sports long dredlocks and a large Uncle Sam hat that would fit right in at a tea party rally, says that because he and his group will be protesting most of the week, he would have happily accommodated the tea partiers for a couple of hours Thursday if they’d just asked him.

Perhaps you can’t blame the tea partiers for not wanting to have foreskin preservation propaganda cluttering up their C-SPAN broadcast. And while likely presidential candidate Rep. Michele Bachmann (R-Minn.) may not have minded the presence of a few bloody fetus posters during her speech (there were some), it’s hard to imagine she would have wanted to be filmed in front of posters of screaming babies emblazoned with the slogan “Don’t Snip the Tip!”. But Wilson thinks that he and the tea partiers would find some common ground. Perhaps the conservative activists might even help move his foreskin cause to the forefront. “I’d be interested to see what the tea party has to say about this. They believe in personal freedom.”