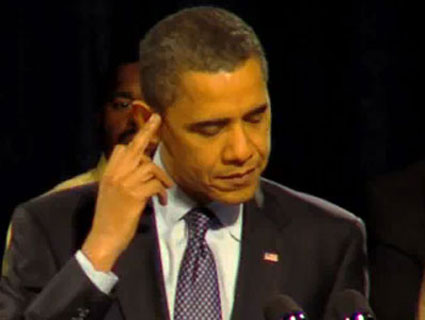 One downside of becoming president after eight years of White House control by the other party is that you get stuck having to defend an awful lot of “shit” left behind by your predecessor. Pardon our language, but in President Barack Obama’s case, this applies rather literally to a move by the Bush administration years ago to crack down on profanity on broadcast TV. Now, the Obama administration faces the decision of continuing the Bush team’s indecency crusade—or saying, well, screw it. And social conservative groups are ramping up a campaign declaring that Obama and Attorney General Eric Holder don’t care about F-bombing the nation’s children.

Most Americans have long recovered from their inadvertent exposure to Nicole Richie’s utterance of the word “shit” during the Billboard Music awards in 2003 and Cher’s 2002 diss of her many critics on the same show, “So fuck ’em. I still have a job and they don’t.” The Federal Communications Commission is not so lucky.

In 2003, after Bono accepted an award at the Golden Globes, saying on live TV that “this is really, really fucking brilliant,” the Parents Television Council, a religious-right watchdog group, demanded that the FCC clean up the broadcast airwaves. In what became known as the “Golden Globes order,” the FCC ruled that a single utterance of the “F” or “S” word could violate the law prohibiting the broadcasting of obscenity. The FCC went ahead and fined major broadcasters $8 million for various indecency infractions, ranging from indiscriminate F-bombs to Janet Jackson’s nip slip during that infamous Super Bowl halftime show.

Naturally, the broadcasters thought, “WTF?” They decided to fight back, appealing the fines and challenging the FCC’s obscenity rules in court. The case went all the way to the Supreme Court, which in 2009 said it might be OK to ban that stuff, but noted that the 2nd Circuit court of appeals still hadn’t addressed the broadcasters constitutional concerns about the free speech issues at stake in the FCC’s new policy. So the case went back to the Second Circuit, where last summer a three-judge panel found the policy “unconstitutionally vague” and guilty of creating a “chilling effect” on speech. This owed largely to the fact that the policy didn’t really define the meaning of offensive speech.

Commenting on the arbitrary nature of the commission’s rules, the court wrote:

While the FCC concluded that “bullshit” in a “NYPD Blue” episode was patently offensive, it concluded that “dick” and “dickhead” were not. Other expletives such as “pissed off,” “up yours,” “kiss my ass,” and “wiping his ass” were also not found to be patently offensive. The Commission argues that its three-factor “patently offensive” test gives broadcasters fair notice of what it will find indecent. However, in each of these cases, the Commission’s reasoning consisted of repetition of one or more of the factors without any discussion of how it applied them.

With the Second Circuit decision, broadcasters have been liberated to drop the F-bomb at will, and evangelical groups are seething. But what really ticks off indecency activists these days is that the case has landed squarely in the lap of the Obama administration, whose Justice Department is charged with appealing—or not—the decision to the Supreme Court on behalf of the FCC. To date, the Justice Department has twice asked for an extension for filing the appeal, which is now due April 21. Religious-right groups have accused Justice of dragging its feet to let the case simply die.

On Wednesday, Penny Nance, the CEO of Concerned Women for America, blasted the administration for not doing more to protect America’s children from dirty words. She said:

The Justice Department must appeal this case unless President Obama and Attorney General Eric Holder are fine with throwing all standards of decency and all protection of children out the window when it comes to the television airwaves.

Those airwaves belong to the public and no one supports dropping f-bombs on Good Morning America in the morning, or Dr. Phil in the afternoon, or American Idol in the evening. These activist judges have thumbed their noses at Congress, the FCC, and American families.

Meanwhile, the Parents Television Council, which brought the original complaint regarding the Golden Globes broadcast in 2003, sent out an urgent appeal to supporters asking them to pressure the administration to act.

But the Obama administration is in a bit of a pickle on the FCC case. While the Supreme Court did say in its 2009 decision that the FCC has the authority to regulate profanity and nudity on the airwaves, actually doing so without infringing on free speech is a Herculean task. The Second Circuit, in fact, thought even trying might be pretty ridiculous given that cable TV is not subject to such regulation and also because parents can get a V-chip to censor their televisions.

The judges noted that a lot had changed since a New York radio station landed in hot water back in 1973 for broadcasting George Carlin’s monologue, “Filthy Words,” in which he spent 12 minutes rattling off a long list of words banned by the FCC. That broadcast prompted the 1978 Supreme Court decision in FCC v. Pacifica Foundation, holding that the government could indeed fine broadcasters for airing patently offensive material, the ruling the FCC relied on in its Golden Globes order.

But as the Second Circuit wrote last summer:

We face a media landscape that would have been almost unrecognizable in 1978. Cable television was still in its infancy. The Internet was a project run out of the Department of Defense with several hundred users. Not only did Youtube, Facebook, and Twitter not exist, but their founders were either still in diapers or not yet conceived. In this environment, broadcast television undoubtedly possessed a “uniquely pervasive presence in the lives of all Americans.”

The same cannot be said today…Cable television is almost as pervasive as broadcast—almost 87 percent of households subscribe to a cable or satellite service—and most viewers can alternate between broadcast and non-broadcast channels with a click of their remote control… The internet, too, has become omnipresent, offering access to everything from viral videos to feature films and, yes, even broadcast television programs.

The Second Circuit lamented that the Supreme Court hadn’t decided to do away with the Pacifica decision altogether.

Where the Obama administration will come down on all this is anyone’s guess. But the president is probably not overly concerned about the occasional on-air F-bomb. Besides, if the Golden Globes ban were still in place, the FCC might have been forced to sanction all the TV news outlets that inadvertently broadcast Vice President Joe Biden’s unscripted declaration last year—when he called the passage of Obama’s health care reform bill a “big fucking deal.”