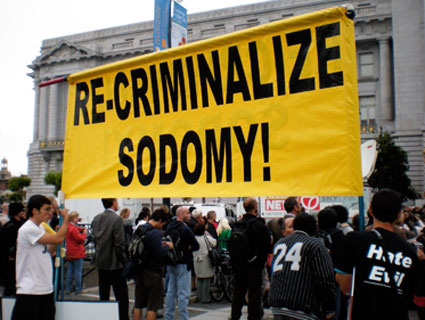 A pair of identical bills that have been introduced in the Texas House would delete language from the state penal code making “deviate sexual intercourse with another individual of the same sex” a misdemeanor offense. Under the proposals, a clause in the state’s health and safety code that cites the criminal statute and states that homosexuality is “not an acceptable lifestyle” would also be repealed.

That is, if the legislature’s Republican supermajority ever lets the bills come to a vote.

“Their silence is deafening,” says Democratic State Rep. Jessica Farrar, who sponsored one of the proposals. “It’s killing us. It’s just as bad as if they were vocal.”

In 2003, the Supreme Court ruled in Lawrence v. Texas that the state’s enforcement of the “homosexual conduct” provision was unconstitutional. In that case, two men were arrested for having sex in their bedroom, after a neighbor phoned in a phony weapons complaint. Texas, which at the time was one of 14 states with anti-sodomy laws on the books, has noted the Lawrence decision in its online penal code, but it takes a full act of the legislature to repeal a law.

“It would be like still having on the books that an African-American couldn’t marry an Anglo,” says Texas Rep. Garnet Coleman.

Normally, that’s not a problem. “Texas has actually done a pretty good job revising its laws and cleaning stuff up,” explains Charles Spain, a Houston municipal court judge and former chairman of the LGBT law section for the State Bar of Texas. In 2009, the legislature passed an omnibus bill formally repealing more than three-dozen bills that had been ruled unconstitutional by the courts. But the homosexuality statute was pointedly not included in that package. Since the ruling, Farrar and Rep. Garnet Coleman, both Houston Democrats, have launched multiple efforts to get the law repealed, to no avail. Similar bills fell short in 2009 and 2007. For the first time this year, they were able to get a committee hearing, a coup in itself.

“By removing it from the statute, it says Texas is both literally and figuratively complying with the law and making that known to its citizens,” says Coleman. “This is a legal issue, not a social issue. It would be like still having on the books that an African-American couldn’t marry an Anglo.”

No conservative activists testified against the bills at a joint hearing on the proposals last week, but, Coleman concedes, that’s probably because they didn’t need to. Republicans have a 101-to-49 advantage in the Legislature, and their most recent party platform (PDF) in 2010 included a plank rebuking the Lawrence decision and calling for homosexuality to remain outlawed: “We oppose the legalization of sodomy. We demand that Congress exercise its authority granted by the U.S. Constitution to withhold jurisdiction from the federal courts from cases involving sodomy.” (That same platform called for gay marriage to be criminalized.) The state’s Republican governor, Rick Perry, has previously offered his support for the ban on homosexual conduct, stating in 2002, “I think our law is appropriate that we have on the books.” In his new book, Fed Up!, he decries the decision as an example of “nine oligarchs in robes” legislating from the bench.

State Rep. Wayne Christian, a Republican and one of the state’s leading social conservative politicians, told the Austin American-Statesman last month that he likely wouldn’t support the bills repealing the ban on gay sex because the House already has too much on its plate. Among other things, the legislature is debating a bill to allow college students to carry concealed firearms in lecture halls, a measure to require women to view an ultrasound before having an abortion, and legislation to prevent state courts from applying Islamic sharia law. Neither Christian nor any of the other five Republicans on the Legislature’s criminal jurisprudence committee responded to Mother Jones‘ requests for comment.

Farrar has no illusions about the bill’s chances: “The prospects don’t look good.”

The state’s sexual education curriculum, however, has been changed to reflect the decision: Its materials no longer teach that “homosexuality is not an acceptable lifestyle and is a criminal offense,” as they did prior to the ruling. As Farrar notes, that might be the reasonable decision, but it’s legally dubious, given that the statute technically still exists. “We’re essentially asking them to not follow the law,” she says.

Despite the state’s conservative tilt, support for gay rights is picking up in Texas. According to a 2010 Texas Tribune poll, 63 percent of eligible voters supported at least some form of legal recognition for gay couples. Coleman, who has also introduced legislation to legalize same-sex marriage and extend hate crime protections to transgender victims, says he’ll try to repeal the sodomy statute again two years from now, if his bill stalls in committee this time around.

“You make progress every time, and then sometimes, poof, there it goes,” he says. “If we can just pass it out of committee, that would be progress.”