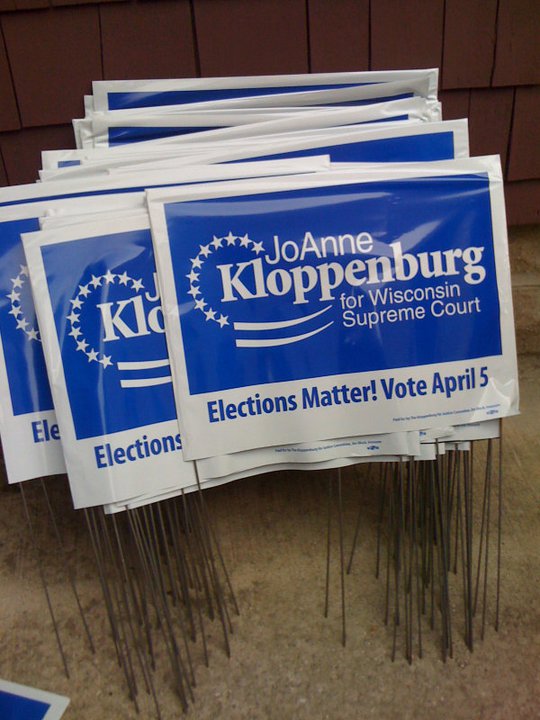 By the slimmest of margins, liberal JoAnne Kloppenburg, a long-time assistant attorney general, upset conservative sitting justice David Prosser in the race to fill the seventh seat on the Wisconsin Supreme Court. Kloppenburg topped Prosser by a mere 204 votes in a race in which 1.48 million Wisconsinites cast a vote. In a statement declaring herself the winner, Kloppenburg said, “Wisconsin voters have spoken and I am grateful for, and humbled by, their confidence and trust…. I look forward to bringing new blood to the Supreme Court and focusing my energy on the important work Wisconsin residents elect Supreme Court justices to do.”

Not so fast, says Prosser’s team. It’s almost certain that Prosser will demand a recount of the election, which would be the first statewide recount in 20 years. And depending on how the recount goes, Prosser has the option of legally challenging the election results, not unlike former US Sen. Norm Coleman’s challenge in his battle against Al Franken, a legal fight Franken ultimately won. And like the Coleman-Franken legal battle, a challenge by Prosser could potentially end up before Wisconsin’s Supreme Court on which he currently sits. The election, in other words, is hardly over.

Nonetheless, Kloppenburg’s unofficial victory marks a momentous win for the labor unions and progressive groups that galvanized her campaign and propelled her from an also-ran to a competitive candidate. The Prosser-Kloppenburg race was seen as a proxy fight pitting unions and progressives against Republican Governor Scott Walker and his Republican colleagues who want to kneecap public-sector unions in Wisconsin. Heading into election day, the stakes were high: A Kloppenburg win would prove that unions are still a force to be reckoned with on election day. But if Kloppenburg lost, the movement sparked by the Wisconsin protests would undoubtedly lose some of its momentum, and conservatives would dismiss the uprising in Wisconsin as a flash in the pan.

Mind you, the fact that Kloppenburg was even competitive in the race was a victory for unions and progressives. As I reported yesterday,

Before the votes are counted, Wisconsin progressives have considered the race a victory. Months ago, no one thought Kloppenburg had a chance of toppling Prosser. That she became a competitive challenger indicates that energy from Wisconsin’s protests can be funneled into electoral politics. “Had the protests not happened, Prosser would’ve skated to victory with an easy victory,” says Robert Kraig. “Even if she comes up short, a very powerful message has been sent.”

Now, it looks like Prosser’s the one who could come up short. If a recount confirms Kloppenburg as the winner, it would seal one of the most momentous election upsets in years.