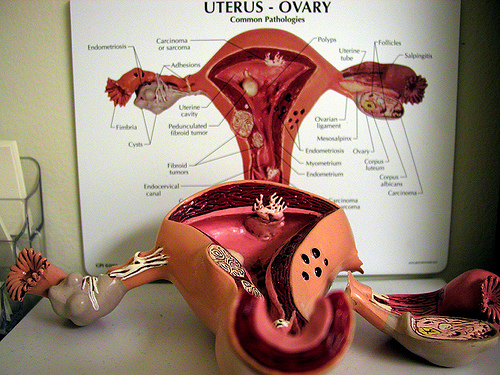 Florida lawmakers apparently aren’t allowed to say the word “uterus” on the House floor. But next week those same lawmakers will be considering legislation that will force Florida women to look at their you-know-whats before they can obtain an abortion.

The bill in question, HB 1127, would make Florida women seeking abortions subject to both an ultrasound and a doctor’s detailed description of what’s in there.  I’m guessing the doctor might even be forced to—gasp!—use the word “uterus” as he or she performs the ultrasound.

“How do you ban the word ‘uterus’ at the same time you’re debating a bill that would force women to look at a picture of their uterus?” asks Stephanie Kunkel, executive director of the Florida Association of Planned Parenthood Affiliates.

Florida’s bill, which has been introduced in both the state House and the Senate, is much like sonogram bills that other states have considered. From the House version of the bill:

A woman can sign a waiver that allows her to avoid viewing the ultrasound, but she will still have to listen to the doctor describe it.

The bill creates an exception for women who are the victims of rape, incest, domestic violence, or human trafficking, but only if the woman produces a copy of a restraining order, police report, medical record, or other court order proving she is exempted. Providing “documentation” for these crimes is often quite difficult. A woman would also be excused from the ultrasound if she has a serious medical condition that required an abortion to prevent “the risk of substantial and irreversible impairment of a major bodily function.”

The bill has already passed through one Senate committee and one House committee, and additional committees in both chambers are expected to debate and approve it this week. Similar bills have passed in the Florida House every year since 2007, Kunkel says. The Senate also approved a similar measure in 2010, but then-Gov. Charlie Crist (R) vetoed it, arguing that it “places an inappropriate burden on women seeking to terminate pregnancy.” But with Republicans in control of both the House and Senate and a new, more conservative governor, Rick Scott, in office, advocates for abortion rights fear that the ultrasound bill will become law in 2011.

There are a total of 18 bills in the Florida legislature this year that would limit abortion access. Since the Speaker doesn’t want to hear the Part of the Woman’s Body Which Cannot Be Named in debates, abortion rights advocates in Florida argue that he should probably not be making laws that affect it. “If the speaker can’t bear to hear or say the word ‘uterus,’ he shouldn’t be legislating it,” Kunkel says.