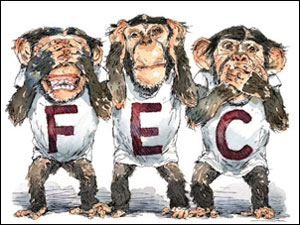 In April 2008, days before a special election in Louisiana’s 6th Congressional District, a shadowy group called Freedom’s Watch unleashed a nasty attack ad accusing Democratic candidate Don Cazayoux of backing public health care “handouts” for illegal immigrants. It was an outright lie, but with Cazayoux (pronounced CAH-djoo) ahead in the polls, right-wing groups were hurling all the mud they could find—or fabricate.

Cazayoux and his Democratic allies tracked down the outfit’s campaign filings in an attempt to unmask the funders behind Freedom’s Watch. But the section where its donors should have been listed was blank. Upset that Republicans were flouting the law, the head of the Democratic Congressional Campaign Committee took his complaint to the Federal Election Commission.

Then…silence. Two years passed (PDF) before the FEC weighed in. By then, Freedom’s Watch had long been defunct. Delayed as it was, though, the FEC’s ultimate decision raised eyebrows in Washington. There wasn’t enough evidence of wrongdoing, the commission concluded (PDF)—and indeed, other independent political groups were free to follow the lead of Freedom’s Watch, as long as the money wasn’t earmarked for a specific ad. So unless a donor gave explicit instructions like “I want to fund an ad blasting Don Cazayoux on the evening news of the local NBC affiliate on May 1,” disclosure requirements didn’t apply. It was a textbook case of the loophole devouring the rule.

Ask experts and good-government groups about the decline of the FEC, and they’ll inevitably give you an earful about the Freedom’s Watch controversy. Or they’ll explain how the percentage of groups disclosing their donors has plummeted by more than 60 percent since 2004 (PDF). Or they’ll lament how, more than a year after the Supreme Court’s Citizens United decision, the FEC has barely begun debating what it means.

Crippled by the kind of paralysis that makes Congress look like a well-oiled machine, the FEC is a shell of a watchdog at a time when more money is gushing into American politics than ever before. “The Federal Election Commission is a national scandal,” says Fred Wertheimer, president of the campaign-finance reform group Democracy 21. “We have no enforcement of the campaign-finance laws.”

The FEC opened its doors in 1975, part of the reform package enacted after the Watergate scandal, in which Richard Nixon’s presidential reelection committee accepted illegal contributions from corporations and wealthy donors—some of whom jetted into Washington literally hauling bags of cash. The law that created the FEC called for it to be made up of three Democrats and three Republicans. Only with a bipartisan four-vote majority could the commission get anything done.

For much of the ’70s and ’80s, this curious arrangement worked. But then came Bill Clinton’s 1996 reelection bid, when the president vowed to adhere to a spending limit of $37 million in exchange for receiving federal campaign funds. Meanwhile, however, Clinton was huddling with top donors to the Democratic National Committee and plotting to use their money for pro-Clinton TV ads. In the end, the Democratic Party used every trick in the book to evade campaign-finance law and woo donors, including sleepovers at the White House, flights on Air Force One, and even use of the presidential box seats at the Kennedy Center. The ’96 election, says one expert on political fundraising, caused “nothing less than the breakdown of the campaign-finance system.”

Things got worse still. During the George W. Bush era, GOP leaders packed the commission with a trio of conservative ideologues, and today the FEC epitomizes gridlock. Between 2003 and 2008, the commission deadlocked on about 1 percent of its enforcement actions, according to an analysis by Public Citizen (PDF); the numbers spiked to 16 percent and 11 percent in 2009 and 2010. Scott Thomas, a former Democratic FEC chairman, says the GOP members increasingly clash even with the commission’s own legal staff. “For almost the entire history of the FEC, the commissioners were open to receiving recommendations from the staff,” Thomas says. “Now they are being stopped cold by those three commissioners.” The leader of the FEC’s conservative clique is Donald McGahn, a shaggy-haired attorney (known to play the guitar while prepping for case rulings) who opposes just about all campaign-finance laws. He previously was counsel to former House Majority Leader Tom DeLay (R-Texas), who was convicted by a Texas jury last fall for laundering corporate donations. (McGahn did not respond to a request for comment.)

The FEC isn’t beyond saving. In May, five of the FEC’s six commissioners, including McGahn, will be up for replacement, giving the Obama administration an opportunity to reshuffle the commission. But first it must wrestle with Sen. Mitch McConnell (R-Ky.), one of Washington’s fiercest opponents of campaign-finance laws. From his perch as the Senate minority leader, McConnell has blocked Democratic nominees, while supporting conservatives opposed to campaign-finance restrictions. “[McConnell] is really the whole key to the FEC,” says Public Citizen’s Craig Holman. “He realized several years ago that a very effective way to minimize the effect of federal laws is to undermine the regulator.”

A battle to revamp the FEC would come at a crucial moment for American politics. Campaign spending is projected to exceed $6 billion in 2012 (it was $5.3 billion in 2008), thanks in large part to the Supreme Court’s Citizens United decision, which removed most limits on corporations supporting specific candidates. The FEC’s Republican commissioners also want corporations to be able to host fundraisers that directly benefit particular candidates, a move that would toss out more than 100 years of federal law.

In the end, it will require more than a new lineup at the FEC to usher in real change, says Richard Hasen, a campaign-finance expert at Loyola Law School in Los Angeles. From Watergate to Enron, major campaign reforms have usually followed revelations of specific, large-scale abuses. “It takes a scandal,” Hasen says, “to make a campaign-finance law.”