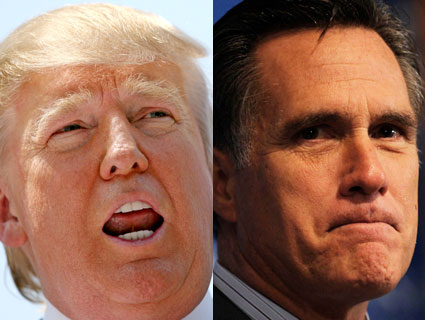 It’s tempting to dismiss Donald Trump’s attempt at an unfriendly takeover of the GOP’s 2012 presidential contest as a novelty act. But Mitt Romney ought to be worried—very worried.

Not because Trump will be able to snatch the Republican nomination. Unless the bankruptcy-prone celebrity developer can totally rewrite the laws of politics, he will remain a longshot—snake eyes or box cars, take your pick. His obsession with Obama’s birth records has marginalized him straight out of the gate, generating an all-hair-and-no-cattle rep (though Sarah Palin, appropriately enough, is defending him). With his fact-free embrace of birtherism, Trump may be earning trash-talking points among the GOP electorate’s die-hard Obama haters. Still, Trump has problems with the overlapping constituencies of the right. Social conservatives will surely be suspicious of the thrice-married playboy’s flip-flops on abortion and gay rights. And tea partiers will hardly cheer his past support of single-payer national insurance and a 14.25 percent tax surcharge on the wealthy.

Yet even if his M&A effort is a deal too far, Trump remains a torpedo pointed straight at Romney. The bad-boy businessman took an opening shot at the former Massachusetts governor last weekend on CNN:

Well, Mitt Romney is a basically small business guy, if you really think about it. He was a hedge fund. He was a fund guy. He walked away with some money from a very good company that he didn’t create. He worked there. He didn’t create… Well, but, look, he would buy companies, he’d close companies, he’d get rid of jobs… I’m a much bigger businessman. I mean, my net worth is many, many, many times Mitt Romney.

Put aside the mine-is-bigger-than-his braggadocio. Trump, despite his initial buffoonery, has the standing to challenge Romney’s core narrative: I’m a business guy who can save the American economy. After all, Trump’s criticism of Romney is solid. Romney was CEO of Bain Capital, which bought and sold dozens of companies, often merging or downsizing firms and selling off assets, which led to job losses. As the Boston Globe noted in 2008, “a review of Bain’s investments during Romney’s tenure indicates that job growth was not a particular priority.”

As Romney campaigns to be CEO of the USA, his conventional GOP opponents—Tim Pawlenty, Haley Barbour, and the others—can be expected to question his claim that he’s the best choice to revive the American economy. But they’ll be doing so as politicians, without much personal history to back up their charges. Trump, despite a past that includes a string of failed deals (he lost money in the casino business?), will be confronting Romney as a tycoon: businessmano-a-businessmano. This will add a great deal of sting to his lashing of Romney. If Trump says Romney is a corporate parasite and no master of The Art of the Deal, it will mean much more than Rick Santorum bleating the same point.

And there’s this: Trump can take the anti-Romney argument to more corners of the media than the traditional 2012 contestants. For the next eight or so months, the GOP presidential race will transpire on a relatively narrow media field: on cable TV news and the political pages of newspapers and websites—the usual spots. Trump the Celebrity transcends these confines. If he throws his hair into the ring, he will draw media attention that extends beyond the politerati. That means that when he’s blasting the front-runner as a buy-’em-and-bleed-’em empty suit, this anti-Romney message will resound in media that reaches less-politically minded people—that is, voters who don’t engage deeply during the primary season but who vote in the general election. People magazine, The View, whatever—Trump has more access to non-political information highways than the rest of the pack. Palin might be able to give Trump a run for his money in this regard, but the former half-term governor will hardly be as effective a critic of Romney’s business background as Trump.

If Trump decides to take the anti-Romney banner into battle, he will get plenty of attention for it. He’ll put it up in bright lights in Times Square. One thing that Trump excels at is getting attention.

Trump has added both drama and comic relief to the Republicans’ So You Wanna Be President? reality show—which may be good for ratings, his ratings. At a time when the US economy is fragile and the nation, engaged in three military actions, is deep in a debate over deficits and the role of government, Trump could have focused his initial presidential exploration on economic policy matters; instead, he went straight for the crazy with birtherism. “People love this issue especially in the Republican Party,” he said recently, displaying his sense of priorities. That may make Trump seem like a joke, but Romney ought not be laughing.