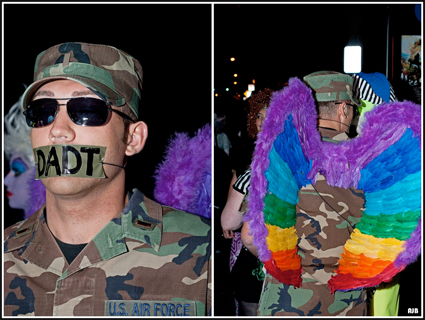 At bases around the world, the military has already begun training service members to tolerate gay and lesbian colleagues’ displays of affection, and to lay off the “gay bar” jokes…and yet this week, it still barred a standout former Army cadet from rejoining the ranks, because her lesbianism breaks the existing rules. The developments show how current and aspiring LGBT service members can continue to expect uneven treatment until Pentagon leaders dot the i’s and cross the t’s on a policy change that’s already sailed through Congress.

Advances are being made, sort of. The AP notes that, since March, thousands of troops have already undergone instruction on how to work congenially with gay colleagues:

If a Marine spots two men in his battalion kissing off-duty at a shopping mall, he should react as if he were seeing a man and woman. If he turns on the television news to see a fellow Marine dressed as a civilian and marching in a parade with a banner that reads, “Support Gays and Lesbians in the Military!” he should accept it as a free right of expression.

The Marines are also reminding their charges that they’re still entitled to think homosexuality is wrong; they just can’t impose that dictum on their brothers and sisters in uniform. “These changes are about policy,” their guidebook states. “The policy is about adherence to orders and behavior, and not about beliefs.”

And yet, the case of Cadet Katie Miller—which may be familiar to Mother Jones readers—shows that the policy is in limbo, and out service members are still out of luck in the foreseeable future.

Last summer, exasperated with the military’s Don’t Ask Don’t Tell policy, Miller came out as a lesbian, resigned her US Military Academy appointment, and transferred to Yale. “I intend for my resignation to offer a concrete example of the consequences of a failed law and social policy,” she wrote. And she made it clear that once DADT was dead, she’d happily rejoin the service. Congress repealed the 1993 policy late last year, and Miller applied for readmission to West Point. Campus officials confirmed this week that she’d been rejected.

It’s not that the Army didn’t want Miller in uniform—given her record of achievements in two years at West Point, (ninth in her class of 1,100, top-notch athlete, peer leader), who wouldn’t? It’s just that gays still can’t serve openly until the military’s brass announce that their Don’t Ask Don’t Tell repeal process is done:

“While at the academy Ms. Miller remained in good standing and had done exceptionally well academically, militarily and physically,” said Lt. Col. Sherri Reed, director of public affairs at West Point. “The choice to seek re-admission is available to her once the repeal process is completed.”

So when will that be?

It’s supposed to be a done deal 60 days after the president and senior defense advisers certify that the repeal won’t hurt troops’ ability to fight. It could go into full effect by late summer or early fall, by some estimates…Servicemembers United recently installed on its website a countdown clock marking the time elapsed since President Obama signed the repeal.

West Point couldn’t really have been expected to rule differently on Miller’s application, given the constraints of the current policy. But until the military bureaucracy reacquaints itself with the 21st century—and it congressional mandate—soldiers, sailors, Marines, and airmen will be stuck in a bizarro loop where gay smooches are to be tolerated, but high-performing gay colleagues are nowhere to be found.