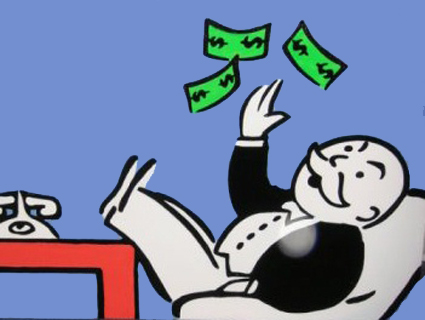 The recession is far from over for millions of Americans, but prosperity has returned to the nation’s boardrooms and corner offices. After two years of declines in the wake of the financial crisis, executive pay is skyrocketing. CEOs at the country’s 200 largest companies earned an average of 20 percent more last year than in 2009, according to recent corporate filings. By comparison, average pay for workers in the private sector rose just 2.1 percent last year—nearly the smallest increase in decades.

While some CEOs, such as Apple’s Steve Jobs, took symbolic $1 salaries last year, many kept drawing outsized checks. Below, we list 10 of 2010’s most egregiously overcompensated executives. They’re selected not just on the size of their pay packages, but how much more they were paid than their peers at similar companies, as well as the disparity between their personal bottom line and their companies’. These 10 vividly illustrate what veteran compensation consultant Bud Crystal views as a broad problem in many boardrooms: “You have almost no relationship between pay and performance when it comes to the CEO.”

Viacom CEO Philippe Dauman’s staggering $84.5 million take makes him the highest paid chief executive in the nation. After getting a 149 percent raise in 2010, his pay bested that of the fourth- and fifth-highest-earning CEOs combined—and that was only for nine months on the job (Viacom changed its fiscal year in 2010 to end in September). During that time, Dauman brought home an average of $312,963 a day. To be sure, Viacom, the gargantuan media conglomerate that runs Paramount Pictures, MTV, Comedy Central, and Nickelodeon, saw respectable growth last year. It defended Dauman’s pay by arguing that $54.5 million of it was a one-time signing bonus tied to a six-and-a-half-year extension of his contract. Even if that bonus is averaged over that period, Dauman would still be, on a monthly basis, the highest paid CEO in America, overseeing a company whose stock price closed out the 2010 fiscal year down 12 percent from its 2007 high.

In 2009, Occidental Petroleum’s Ray Irani was already the highest paid CEO in the energy biz. In 2010, his pay more than doubled. Since Irani took the helm in 1990, he’s earned more than $1 billion in salary and stock options. This includes a windfall of $400 million in 2006, one of the biggest single-year payouts in US corporate history. His compensation far outstrips that at other high-performing energy firms. In an unprecedented vote last May, Occidental’s shareholders advised it to reject Irani’s pay deal—one of only three shareholder rebukes to management on executive pay last year. Irani will take a salary cut this year and retire.

Lawrence J. Ellison, Oracle
Compensation: $70.1 million
Stock performance: +16%
Larry Ellison, the third richest man in America, gets props for taking a pay cut last year even as Oracle shares rose in value. Even so, the America’s Cup winner still earned more than all but two CEOs. While Ellison founded Oracle and turned it into a tech giant, the days of triple digit growth at the software and server company are long gone. Oracle’s 16 percent stock return last year barely outdid the S&P 500’s average. And any karmic debt that Oracle owes its founder has surely been repaid. During the aughts, the company gave Ellison a total of $1.84 billion, making him the best paid CEO of the decade.

Wiliam Weldon, Johnson & Johnson?
Compensation: $21.6 million
Stock performance: -0.5%?
In 2009, Johnson & Johnson’s sales declined for the first time since the Great Depression, battering its blue chip stock. A wave of product recalls last year further drove down share prices. But there are no more tears for CEO William Weldon, who earned $9.3 million in salary and stock options and a fat $12 million bonus, making him the nation’s 12th-highest-paid CEO. It may help that Weldon chairs the J&J board and has personally nominated many of its members—the same people who approve his pay package. In its 2009 annual report, the board commended Weldon for his “strong leadership during a very demanding year.” In the first four months of this year, the company’s stock has fallen four percent.

John Chambers, Cisco Systems?
Compensation: $18.9 million
Stock performance: +5%
“We have disappointed our investors and we have confused our employees,” Cisco CEO John Chambers apologized to his employees last month after a year of anemic growth and profits. But he wasn’t sorry enough to take a pass on his $18.9 million in pay, double what he earned in 2009. That figure includes $8.2 million in stock options, more than what 75 percent of his industry peers received. Cisco’s shares fetch 35 percent less today than in 2006, when Chambers started as the chairman of its board. More bad news: Two years after buying the maker of the Flip video camera for $590 million, Cisco has just announced that it’s spiking the product.

John Stumpf, Wells Fargo?
Compensation: $17.6 million
Stock performance: +16%
In 2009, when Wells Fargo still owed the federal government $25 billion in bailout funds, CEO John Stumpf got a $5 million raise. The resulting hurricane of bad publicity may be why Wells Fargo cut Stumpf’s base pay in 2010. But it still gave him a $3.3 million cash bonus, leaving his total earnings almost unchanged. He remains one of the country’s highest-paid bank CEOs. A few secrets to his success: Profiting from foreclosing on homeowners and hoarding liquid assets to shore up the bank’s bottom line.

Michael Strianese, L-3 Communications
Compensation: $16.5 million
Stock performance: -17.2%
This major defense contractor’s shares plunged in 2010 due to fears of military spending cuts, an alleged Air Force security breach, and public backlash against its full-body airport “porno” scanners. Even so, CEO Michael Strianese got a raise, raking in $16.5 million. Since Strianese became CEO in 2006, his pay has jumped 70 percent even as L-3’s shares have seesawed. As the budget debate began heating up last year, Defense Secretary Robert Gates told defense contractors to start delivering cost savings lest the government force them to do it. In response, Lockheed Martin announced modest cuts to its executive compensation. L-3, however, gave its head honchos a 22 percent pay hike.

Shantanu Narayen, Adobe Systems?
Compensation: $12.2 million
Stock performance: -20.8 %
Last year, Shantanu Narayen earned about as much as the CEOs of eBay and Texas Instruments, tech firms with much better stock returns and double Adobe’s market cap and profits. Narayen received a 143 percent raise even as Abobe, the maker of Flash, Photoshop, and PDF readers, released a disappointing earnings forecast in September that sent its shares plunging by 20 percent. Abobe claims to emphasize long-term growth over quick gains; like many companies, it grants most of its executive pay in the form of stock. Yet with its shares in the gutter, even a modest recovery this year could quickly give Narayen another windfall.

John Surma, United States Steel?
Compensation: $8.3 million
Stock performance: 6.4%
Weak demand from beleaguered US manufacturers caused US Steel to underperform the rest of the S&P 500 last year. Nevertheless, CEO John Surma’s pay shot up by a staggering 449 percent. To be fair, Surma earns a lot less than many of executives, and his raise reflects a pay cut that he took in 2009 as part of a turnaround plan. Yet that anticipated turnaround isn’t complete. US Steel shaved its annual losses from $1.4 billion in 2009 to $482 million last year—not bad, but hardly in the clear yet.

Craig Dubow, Gannett?
Compensation: $7.9 million
Stock performance: 2.8%
In January, the ailing newspaper giant announced that it would extend a two-year program of mandatory furloughs for its workers. CEO Craig Dubow would share in the pain by giving back a week’s worth of pay. But he wouldn’t return his 80 percent raise, which he’d earned while boosting profits through layoffs and wage cuts. Not that the downsizing has helped: In the past three years, the company’s flagship USA Today has lost 20 percent of its readership; the company’s stock is down by nearly half. On the Gannett Blog, a watchdog site run by a former USA today editor, reaction to Dubow’s pay package was withering. “Pure and simple,” one commenter wrote, “a laugh in every employee’s face.”