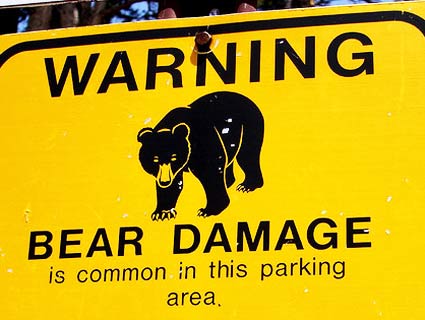 When Congress passed the Wilderness Preservation Act of 1964, they defined “wilderness” as an area “untrammeled by man.” The thinking was that if only certain activities like hiking, camping and biking were permitted in a space, the human impact would be negligible. But a new study published on March 3 in the open access journal PLoS ONE shows that even these minor activities alter the ecosystems we want so badly to preserve.

A group of researchers at the University of Calgary in Canada placed more than 40 cameras on hiking trails and roads in the Rocky Mountains in Alberta to observe how even mild human traffic alters the ecosystem. They found that on roads and trails trafficked by more than 18 visitors a day, large predators like wolves, black bears, grizzlies and cougars were less abundant than they would be in the wild. Furthermore, they found that on roads trafficked by more than 32 people a day, the number of small prey increased by 300%.

Taken together, the findings suggest that hiking trails and roads can displace large predators and alter the predator/prey balance of an ecosystem. The researchers make sense of their results this way:

The positive association between herbivore prey and humans that we documented might not only be the result of humans displacing predators, but also due to humans improving forage around roads and trails. High quality and quantity forage resources are correlated with high-human use roads and trails in the study area. Humans might therefore provide the best habitat patches for herbivores by both deterring predators and improving food resources.

In other words, the act of experiencing the wilderness necessarily alters it. Whether or not this trade off is worth it no doubt depends on who you ask. But one thing seems clear: if we truly want to create places on this planet “untrammeled by man,” we’re going to have to stop trying to visit them.