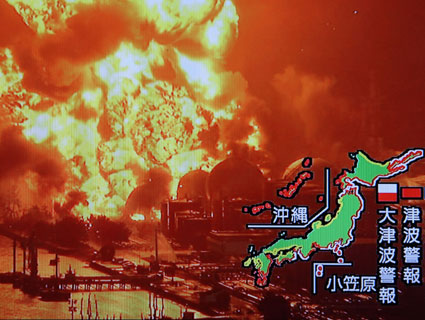 The explosion of a gas tank by an earthquake on March 11, 2011 in Sendai, Japan.Jana Press/ZUMAPRESS.com

A few days ago, driven by equal parts neuroses and scientific curiosity, I downloaded an app on my phone that tells me about recent earthquakes around the world. Over the past few days, I’ve noticed a bunch of small quakes off the eastern coast of Japan’s Honshu island, exactly where the devastating 8.9 quake struck early Friday morning, killing thousands. I began to wonder: If I knew about the smaller quakes, then certainly seismologists must have, so why didn’t anyone warn Japan? According to Morgan Moschetti, a research geophysicist at the United States Geological Survey, clusters of small earthquakes are extremely common, and “rarely do they have any predictive value.” In this case, the earlier small quakes were what’s known as foreshocks, previews to a larger event. But there’s no way to distinguish a foreshock from a self-contained cluster. Here are some answers to a few other earthquake questions:

Moschetti says that an 8.9 quake is only possible in subduction zones, areas where one plate is underneath another plate. The only US subduction zones are in the Pacific Northwest and Alaska. Seismologists didn’t discover the subduction zone in the Pacific Northwest until about 20 years ago; cities in that region have been scrambling to improve their infrastructure ever since. The city of Sendai is relatively close to the fault where it happened, while Seattle and other Northwest cities are further away from the fault, but an earthquake in the region could still cause a large tsunami. The subduction zone in Alaska has been known about for longer; of course, Alaska is much less densely populated than Japan, so a quake there wouldn’t be as deadly. A 9.2 quake in 1964 killed 131 people in south-central part of the state.

California isn’t in a subduction zone, but it’s still very seismically active. Because there have been several devastating quakes in the state inthe past century, California is a little further along in its seismic retrofitting than the Pacific Northwest. Still, a major earthquake could (and probably would) cause significant damage, especially in cities.

What if a quake like this hit in a poor country?

The 2010 earthquake in Haiti was a 7.0 on the Richter scale. At 8.9, Friday’s Japan quake had roughly 1,000 times the energy of the Haiti quake. “Haiti’s a great example of the kind of destruction that quakes can cause in the developing world,” says Moschetti. “And imagine a quake that was 1,000 times more powerful than that one.”

Could climate change cause earthquakes?

Over at Grist, Christopher Mims explains that melting ice and rising oceans, and even small weather changes could indeed cause seismic activitiy, but the USGS doesn’t have an official position on climate change’s potential to cause earthquakes, and Moschetti was not willing to comment.

Why yes, reports Suzy Khimm, to the tune of $27 million less for USGS.

Did the moon have anything to do with the earthquake in Japan?

Nope, although some seismologists believe the moon’s gravitational pull can cause tides that stress tectonic plates. But it’s not thought to be a sginificant cause of seismic activity.

What are the differences between the Japan quake and the cluster of small quakes in Arkansas?

The USGS doesn’t know a lot about the tectonics in the part of Arkansas where the quakes have been ocurring, but they’re sure that the area is not as earthquake-prone as the Pacific rim. “You don’t have two plates moving relative to each other in that area,” says Moschetti. He didn’t comment on whether the Arkansas quakes were related to natural gas drilling, but two gas companies stopped fracking in the area this week, since it’s possible (even likely) that the drilling activities contributed to the quakes.

Are US nuclear plants prepared for an earthquake?

Several nuclear plants in Japan shut down today, and one reported that it had lost some of its cooling water, forcing a precautionary evacuation of the surrounding area. Moschetti says that in the US, all nuclear plants have to go through a seismic permitting process to show that they are prepared for whatever size of earthquake is likely in their area, “but there’s always a chance that an earthquake will happen where don’t expect it.”

Why’d the tsunami hit Santa Cruz, California, but not Indonesia?

The direction in which a tsunami travels has to do with the geometry of the fault. In this case, the fault was oriented southwest-northeast, so the energy that caused the tsunami moved to the southeast.

Any tips for choosing where you live based on earthquake safety?

If your building or house is older than a few decades, ask your landlord or real estate agent if it has been seismically retrofitted. If you’re in earthquake-prone area, it’s better to live over bedrock, not sediment, since “sediment can amplify waves of motion in earthquake,” says Moschetti. Geological composition varies by neighborhood; the USGS’ National Seismic Hazard Mapping Project can, in some cases, help you determine whether your area is particularly vulnerable. First floor dwellings are generally safer than upper floors.

I heard people in Santa Cruz were surfing on the tsunami. Is that safe?
No.